The so-called RNA world hypothesis has gained fresh momentum with the synthesis of the longest lab grown RNA strands made using an enzyme that is itself made of RNA, an ’RNAzyme’.

Philipp Holliger and his team at the Medical Research Council laboratory in Cambridge, UK, developed an RNAzyme that makes RNA strands comprising up to 93 bases. 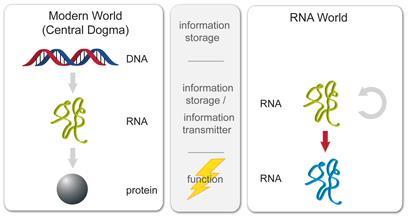 The RNA world: RNA would have done the jobs that proteins and DNA do today

In 1968, Francis Crick suggested that the first enzyme might have been made from RNA, and from this idea came the ’RNA world’ hypothesis, in which life began with an RNA molecule that gained the ability to self replicate. The hypothesis has since generated huge interest in the scientific community, and the wider public, but it remains unproven.

Scientists identified the first RNAzyme in the early 1990s. In later work, they picked mutants of that structure to grow longer, but the chains were still relatively short chains, typically comprising about 20 bases, and the bases were put in the same sequence despite changing the mutant.

Holliger normally works on the more familiar enzymes made of proteins. By introducing evolutionary pressure, the group was able to selectively improve the enzyme and then combine the best bits of their experiments to make a new RNAzyme that replicates faster and more reliably than previous attempts.

’The pressure was just the right kind of pressure’ says Gerald Joyce, who studies the evolution of RNAzymes at Scripps in California, US. Holliger was able to add ’some really nice technical twists to select for polymerisation’, he explains. ’Molecular evolution is a powerful process and allows us to rapidly identify RNA molecules with a desired activity’ adds Holliger, explaining how the group found their ’needle in the haystack’.

As well as making longer strands of RNA, the RNAzyme can also make enzymatically active RNA molecule, something Joyce says is extremely significant.

Holliger says he hopes that his work, along with that of other groups, will provide sufficient clues to ’replay the tape’ and plot a likely course for how life began.

’The mindset in the field is let’s just make an RNA world so we can see one in motion,’ says Joyce. ’There’s only one example of life that we know of wouldn’t it be cool if we had another example, even if it was synthetic biology,’ he adds.

’There are still some formidable challenges ahead,’ Holliger says. But the development of self-replicating RNA would be an enormous step forward. ’It’s pretty clear where you’d go from there,’ he adds.