Researchers in the UK have invented a new type of dye for imaging structures in living cells that glows for hundreds of times longer than conventional fluorescent probes. The new dye, based on platinum, will carry on emitting light long after any interfering ’autofluorescence’ from naturally occurring molecules in the cell has fizzled out, the scientists say.

Imaging the inner workings of cells is fundamental to biology, and this year’s Nobel prize in chemistry was awarded for the discovery and development of green fluorescent protein, a key marker in tracking intracellular processes. When such tags are excited by a laser, they glow - lighting up whatever molecule they are tagging. 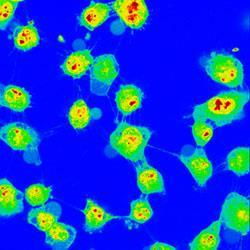 But the probes glow typically for only a few nanoseconds and other molecules that occur naturally in the cell also fluoresce when energised, which creates unwanted background ’noise’.

Now, scientists from the Universities of Sheffield and Durham, with colleagues from the Rutherford Appleton Laboratory in Oxfordshire, have designed a new class of luminescent dyes based on platinum that carry on emitting light for microseconds. ’It’s been a challenge to make long-lived probes,’ says Julia Weinstein, a chemist from the University of Sheffield and one of the authors of the study. ’The dye must be non-toxic and it has to keep glowing for a long time in a relatively warm, aqueous and aerated environment.’ Under these conditions, the molecules are quenched very efficiently by oxygen - causing them to quickly return to their ground state and so stop glowing.

The researchers constructed a terdentate molecule consisting of central platinum flanked by two pyridine rings and topped by a phenyl group. ’There is a key carbon-platinum bond in the centre of the molecule,’ says team member Gareth Williams from Durham University. ’This is a very strong, short bond which gives the molecule a lot of rigidity. Rigid molecules tend to emit light for longer because energy is not dissipated as easily as in weaker, floppier bonds.’ 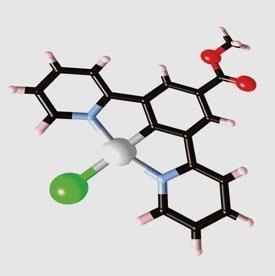 The terdentate molecule has a ’rigid’ structure

The dye was taken up by live cells and, once excited, glowed for several microseconds. It should be possible, says team member John Haycock, a cell biologist from Sheffield, to attach antibodies to the dye to send it to specific, targeted molecules within a cell.

Mike White, a cell imaging expert from the University of Liverpool in the UK, who was not involved with the study says there is a ’great need for longer lived dyes’. ’On the face of things it looks as though they have done the chemistry needed,’ he continues. But White says that the biggest challenge in live cell imaging is being able to couple dyes to structures of interest - something that has yet to be demonstrated with the new molecule. ’The optical properties are great but the real thing is if it can be coupled appropriately to biological molecules in the cell.’