Researchers in Japan have created unique, thin flexible sheets that can transmit electrical energy to nearby devices without the need for direct electrical contact. The new material opens up the intriguing possibility of an electronic tablecloth that can power up a laptop computer simply by placing the computer on the table, or power-transmitting wallpaper that can feed a flat-screen television hanging on the wall.

The system, developed by Takao Someya and colleagues at the University of Tokyo, relies on the well-established phenomenon of induction, where transmission of electrical energy takes place across an insulator by simple electromagnetic coupling. A typical example is an electric toothbrush, which is charged when it sits on the plastic-encased recharger with no direct electrical contact.

Rather than having to position a device directly adjacent to a specified point of contact, however, the key to the Japanese researchers’ system is to have a large area which can direct power to wherever the appliance sits. In addition, the transmitting sheet is thin, flexible and relatively inexpensive to fabricate. 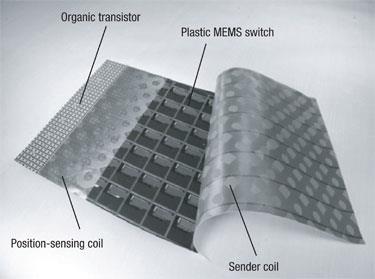 To meet these criteria, the team produced flexible sheets with three central elements, each of which can be printed upon the base substrate. First, the sheet has a position-sensing system, which uses a two-dimensional grid of copper coils and a matrix of transistors made from the organic molecule pentacene, made from five benzene rings linked together in a row.

The sheet also has a switching mechanism consisting of an arrangement of plastic microelectromechanical system (MEMS) switches, which direct the power to the device. Finally, a further two-dimensional series of copper coils transmits the energy.

The sheet is 21 centimetres square, 1 mm thick, and weighs 50 grammes. It contains a grid of 64 position-sensing units and 64 power-transmission units. The sheet was capable of providing 40.5 watts of power with more than 80 per cent efficiency - sufficient to operate a small laptop computer.

When an electronic device containing an appropriate ’receiving coil’ approaches the sheet, its presence is detected by the positioning coils, its co-ordinates noted and relayed by the organic transistor circuit. The MEMS switches then direct the power to that point. 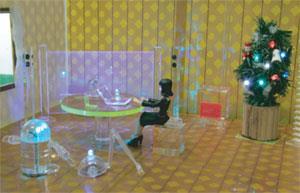 Life in the wireless-powered house

’Since all the device components are manufactured on plastic films, the system is thin, lightweight and flexible,’ Someya told Chemistry World. ’Therefore it is easy to put the sheet system in the wall, desk, floor - anywhere you can imagine. And because the system is manufactured by printing technologies it is potentially low-cost and it can transmit high power selectively to the position of electronic objects, making transmission loss very small.’

Someya pointed out that the system was not designed to transmit power over long distances - devices would need to be in close proximity to the transmitting coils - but rather over a wide area.