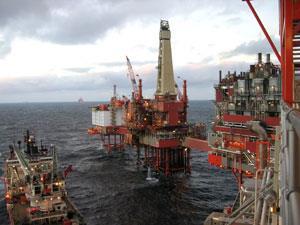 Oil major BP has announced the first deployment of a new technology that it says will lead to a ‘step change’ in the amount of oil recovered from reservoirs, as part of a £4.5 billion development of the Clair Ridge field in the North Sea, west of Shetland.

The technique draws on fundamental chemistry research carried out at the company’s laboratories in Sunbury on Thames in the UK, to find out what causes oil molecules to stick to rock surfaces. Oil that is bound in this way cannot be extracted by the conventional waterflooding, where sea water is injected through layers of porous sandstone to displace the oil.

The researchers found that oil molecules are bound to clay particles within sandstone by divalent cations, such as calcium and magnesium, and in high salinity water the oil strongly adheres to the surface of the clay. However, when the salinity is lower, the divalent cations are swapped for monovalent ions such as sodium, breaking the bond and allowing the oil to be swept towards the well.

Of the £4.5 billion earmarked for the second stage of Clair Ridge, $120 million (£75 million) will be spent on installing a desalination plant to generate water without these divalent cations. BP estimates that this will increase output by a further 42 million barrels of oil over the lifetime of the well, compared with 640 million barrels if untreated sea water was used for waterflooding.

At a capital cost of $3 per barrel, the desalination plant will more than pay for itself, Andrew Cockin, technology leader of BP’s Pushing Reservoir Limits programme, tells Chemistry World. In trials, the enhanced recovery technique, called LoSal, has increased yields by up to 10%. In the field the increase will vary from well to well, though Cockin said it is unlikely to be as high as 10% normally. But given that the current average recovery rate is only 35%, adding another 4% or so with LoCal ‘is a big jump’, Cockin says.

The desalination plant to be installed at Clair ridge will use a reverse osmosis process powered by electricity from a gas turbine generator. Cockin said there will be ‘far greater energy value’ from the extra oil that is recovered than is expended in the desalination process.

The LoSal enhanced oil technology will also be applied to the company’s Mad Dog Phase II project in the Gulf of Mexico and, where appropriate, to all sandstone reservoirs BP develops. On new projects the desalination plant can be integrated into the platform, but BP is also assessing whether retrofitting LoSal to some existing fields is commercially viable and technically feasible.

The projects envisaged to date could increase net recovery across the company’s portfolio by 700 million barrels. BP’s executive vice president for oil production, Bob Fryar, says that if it can be successfully applied to similar fields across the globe ‘it would increase the world’s recoverable oil by billions of barrels’.

However, while BP has published some details of the basic research, it has also patented aspects of the LoSal technology and Cockin says the company views this as giving it a competitive edge when bidding for the rights to new resources.

A lot of knowhow is needed to apply LoSal, as the salt level of the injected water has to be finely tuned to suit the conditions of individual reservoirs. Certain clays are sensitive to water that is too low in salt and it causes them to swell and blocks the pores in the sandstone, restricting the flow of oil. In the case of Clair Ridge, salt levels will be reduced to a few thousand parts per million, compared with untreated seawater which has salt levels of 35,000ppm – potable water has salt levels of 600ppm.

This first deployment of LoSal follows a decade of research, using sandstone from across BP’s global operations. Following this the company carried out tests to prove the technology worked in practice, culminating in a successful field trial in the Endicott field in Alaska.

Clair Ridge was one of the earliest oil finds in the North Sea, but its fractured conformation meant it took from its discovery in 1977 until 2001 before the first oil was extracted. Now, two new platforms are due to be installed, with production scheduled to start in 2016.  At the peak these will produce 120,000 barrels per day, extending the life of the field to 2050.