Möbius molecules with a twist 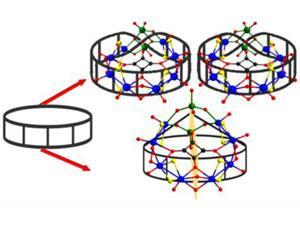 Glasgow-based chemists have managed to make a chiral molecule from achiral starting materials by using a simple Mo4 O8 unit to introduce a twist to the cluster and turn it into a Möbius strip. The cluster is based on electrocatalytic oxothiomolybdates, so the level of structural control the group has achieved could allow for much greater adjustment of structural and electronic properties.

Lee Cronin of WestCHEM at the University of Glasgow in the UK, explains that the work started by investigating whether electrophilic Mo2 S2 O2 subunits would cluster around a small, rigid template such as squarate (C4 O4). Could the ‘guest’ Mo2 S2 O2 define the size and shape of the resultant cluster? The answer was yes, the subunits condensed around the squarates symmetrically forming a ring. That’s when Cronin and his group tried to distort and break that symmetry by adding a small Mo2 O8 unit, ultimately twisting the ring into a Möbius strip topology.

‘We were able to “fill-in” the gap with extra molybdate,’ says Cronin, ‘and that is the secret.’ In practice, Cronin adds, you can make most of the ring and then fill it with symmetrical or twisted blocks to give the required shape. ‘For the future, this Mo8 unit is a very important new building block,’ says Cronin, adding that he and his group have ‘much bigger plans for this approach.’

‘The group of Lee Cronin is very creative and this is just one example,’ says Achim Müller, who works on molybdenum clusters at the University of Bielefeld, Germany. ‘Most chemists like symmetry,’ he adds. ‘But symmetry breaking is a very important process … because it introduces complexity. If you look at the evolution of life, that gets more and more complex.’ And Cronin will certainly use this new molybdate linker to add complexity.

Cronin now intends to use these building blocks to make ever larger and more complex structures, controlling their formation and then exploring how structure affects the various physical and chemical properties of the clusters. But, the concept of complexity has also prompted other ideas. The same system can, from achiral building blocks, form both chiral and achiral compounds and these then separate via crystallisation. ‘This is a really unique observation and makes me wonder about inorganic templating in the origin of life,’ he concludes, saying that he plans to visit this again at a later date.