UK researchers have borrowed a technique from organic synthetic chemistry to develop a new type of drug-release system that is activated by light. The method, the researchers say, would allow a high degree of control over where and when a drug is released, and in what concentration. The technology could be especially useful for protecting medical devices, such as catheters, against microbial infection.

In organic synthesis, 3,5-dimethoxybenzoin (3,5-DMB) derivatives are used to mask carboxylic acid or secondary amine functional groups, by forming esters or carbamates respectively, while reactions take place at other parts of the molecule. The masking agent can then be removed by shining light onto the sample. 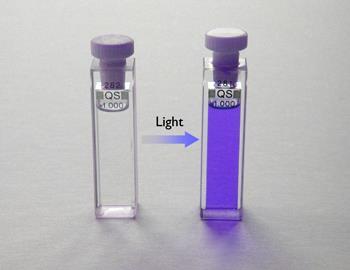 A simple flash of light can strip 3,5-DMB from a drug molecule

Colin McCoy and colleagues at Queen’s University, Belfast, UK, reasoned that drug molecules containing the necessary functional groups could be inactivated by conjugation with 3,5-DMB, and then released selectively by exposure to light of the appropriate wavelength. To prevent the freed 3,5-DMB from then circulating in the body, the masked drug molecules would be immobilised in a polymer from which the free drug could escape but the mask could not.

’You could not simply inject the drug and protecting agent as a pro-drug because you could not have the conjugate circulating around the body after release,’ McCoy told Chemistry World.

The Belfast researchers demonstrated that three common drugs - aspirin, ibuprofen and ketoprofen, each possessing a carboxylic acid group - could be inactivated by bolting on a molecule of 3,5-DMB. The masked drug was immobilised in a hydrogel consisting of a copolymer of 2-(hydroxyethyl)methacrylate and methylmethacrylate. Shining light of an appropriate wavelength splits off the masking agent, allowing the drug to leave the polymer. The 3,5-DMB mask itself has low solubility in biological fluids and remains stuck in the polymer matrix. The concentration of drug released depends upon the duration of irradiation, allowing tight control of the dose delivered.

’We think that our system could have important applications in controlling infection in medical devices such as catheters and intratracheal tubes,’ said McCoy. ’These devices can easily become contaminated with bacteria because they have no inherent antibacterial protection.’ A fibre optic wire could be used to deliver the pulse of light to the right place inside the tube.

’People have started to coat the surfaces of such devices with hydrogels containing antibiotics which gradually diffuse out,’ he added. ’However, simple diffusion is relatively crude - you tend to get a burst of concentration early on which rapidly falls away. Also, because there can be a trickle of low-concentration antibiotic this can encourage bacteria to develop resistance.’

McCoy said that many drugs possessed the relevant functional groups to allow conjugation with 3,5-DMB, and that other masking agents could be developed which responded to a range of wavelengths of light.