Cheap bio-oil could soon compete with crude oil in plastic manufacture, thanks to work by US scientists.

Pyrolysis oil, made from biomass, is mainly used for heating or electricity production. However, scientists at the University of Massachusetts-Amherst have now shown that this cheap starting material can be converted into feedstock chemicals for the plastics industry, and at a competitive price.

Scientists have previously used zeolite catalysts to make feedstock materials like aromatic and olefinic hydrocarbons from pyrolysis oil, but the yields were quite low. The Massachusetts team, led by George Huber, and featuring visiting scientists from Southeast University in China and the University of Nottingham, UK, added a hydrogenation step prior to the zeolite conversion and in this way increased the amount of these valuable chemicals produced by up to three times.

The process uses standard catalysts - ruthenium and platinum for the hydrogenation, and then a commercial zeolite catalyst to convert the hydrogenated pyrolysis oil to the target molecules. By integrating these processes, only partial hydrogenation is required, avoiding high temperature hydrogenation and catalyst coking. The zeolite step at the end can then be done using a fluidised bed reactor that recycles any coked zeolite catalyst, and because the chemistry is well understood, the scientists can tweak the conditions to produce different products depending on what’s required. 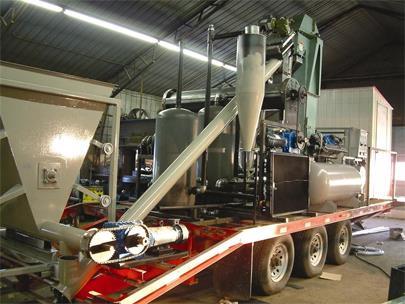 ’There are mainly six major petrochemicals that provide the whole plastics industry with its feedstock,’ explains Huber. ’We’ve worked out a way to make the same chemicals from biomass that you make from crude oil today,’ he added, ’and we think we can be competitive with $60 per barrel oil using this technology’.

At the time of writing, crude oil was trading at around $80 (?50), so the technology certainly sounds competitive. Huber, in collaboration with Anellotech, a start-up he helped found, is currently scaling up the process to send litre amounts of their products to interested commercial partners.

Ultimately, Huber explains that the limiting factor in his technology will be the price of hydrogen, which will dictate the balance between hydrogenation and zeolite conversion. Chris Saffron, an expert in converting biomass into fuels and chemicals at Michigan State University agrees that the hydrogenation will be a limiting factor, but not just due to cost. ’One question I’d have is where are they going to get their hydrogen from?’ Saffron says, explaining that pyrolysis oil is made in rural communities will and need hydrogenation before transport because pyrolysis oil itself is reactive.

Huber does suggest some solutions to this problem, splitting water using renewable electricity sources is one idea, or using hydrogen acquired from more biomass. Ultimately, Saffron does think that overall the science is promising: ’The fact that one can convert biomass to hydrocarbon fuels that could drop into existing infrastructure, is encouraging’, he adds.

’We still think there are several improvements we need to make, from designing better catalysts to designing more efficient reactors and improving process innovation,’ Huber concludes. But he says the paper provides ’a roadmap of what needs to happen.’