Bayer MaterialScience has opened a new carbon nanotube (CNT) production facility at Laufenburg on the German-Swiss border, doubling its production capacity to
60 tonnes per year.

The plant, which began operating in September, is just the latest evidence that chemical companies both large and small are betting on a bright commercial future for the versatile tubes. 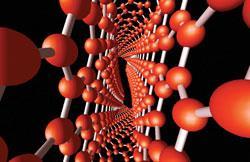 Carbon nanotubes: a product in search of applications

’We see a big future in carbon nanotubes and we believe that it’s an area of innovation and growth,’ said Martin Schmid, head of Bayer MaterialScience’s global CNT operations. ’All being well, we will build another plant that will give us a total new capacity of over 200 tonnes of nanotubes by the end of 2009.’ Even further in the future, Bayer MaterialScience plans to build an industrial-scale production plant with an annual capacity of 3000 tonnes.

Other chemical companies are also getting in on the act. French chemical giant Arkema, for example, opened a CNT pilot plant in south-west France in January 2006 with an annual production capacity of 10 tonnes. Smaller businesses are also getting involved, whether they are well-established chemical companies such as Thomas Swan in the UK, or new start-ups such as Nanocyl in Belgium, which has a production capacity of
40 tonnes a year.

The attraction of CNTs is that they are lightweight yet strong, and have high thermal and electrical conductivities. Yet despite more than 40 per cent annual growth in the CNT market, its long-term future is still uncertain. ’If the cost and price of carbon nanotubes decrease over the next few years then this will open up new opportunities for the product,’ predicted Schmid. ’But if we stay at today’s price level then it’s probably not going to happen.’ And for costs and prices to come down, companies need to find cheaper ways to manufacture CNTs.

Practically every manufacturer currently uses catalytic chemical vapour deposition (CVD) to make their tubes. This involves growing the CNTs by passing a carbon-based gas, such as methane or ethylene, over metal particles that catalyse CNT growth, although each company has developed its own proprietary version of the process.

Improved manufacturing and large-scale production have already caused the price of CVD-produced CNTs to fall substantially, from around $200 per gram in 1999 to under $50 per gram today. Although there are other methods for producing CNTs, such as arc discharge and laser ablation, they don’t produce CNTs in such large quantities as CVD. So most existing manufacturers are concentrating on developing more efficient versions of CVD, as well as gaining more control over the types of tubes they make.

There are two basic types of CNT: single-walled (SWNTs), which comprise a one-atom thick sheet of graphite rolled into a tube; and multi-walled (MWNTs), consisting of numerous SWNTs nested inside each other like Russian dolls.

Most manufacturers concentrate on producing MWNTs, which are easier to produce with CVD but see wide variations in length, width and number of walls. This doesn’t matter for now, because CNTs are usually added in bulk to strengthen polymers in products such as vehicle chassis and sports goods. But more advanced uses of CNTs will require specific types of SWNT. ’An area that is growing very rapidly and is very exciting is advanced electronics,’ said Harry Swan, managing director of Thomas Swan, and great-grandson of the company’s founder. Indeed, SWNT-based electronic circuits are being touted as one way to continue shrinking the computer chip.

Thomas Swan is already producing SWNTs using CVD, but they cost much more than MWNTs (around $200 a gram). A number of US companies, including Idaho Space Materials and Nanotailor, have obtained a licence to exploit a novel SWNT production process developed by a researcher at Nasa’s Goddard Space Flight Center in Maryland. This uses a helium arc welding process to vapourise an amorphous carbon rod, with carbon nanotubes forming as the vapour is deposited onto a water-cooled carbon cathode.

’Single-walled technology just hasn’t taken off because of the cost,’ commented Nanotailor president Ramon Perales. ’If we can get the cost down, we can be a step ahead and make higher-quality nanotechnology affordable.’

But electronic applications still face a major hurdle: the precise arrangement of carbon bonds in SWNTs determines whether they are metallic or semi-conducting, and all the current synthesis methods produce a mixture of the two. Although a number of methods have been developed for separating them, such as centrifuging SWNTs in a density gradient or attaching diazonium salts and then separating them by electrophoresis, none have yet left the laboratory.

Surrey NanoSystems, a company spun out from the University of Surrey in late 2006, is helping to address that with its range of CNT generators, which grow tubes at the relatively low temperatures necessary for semiconductor fabrication processes. According to Guan Yow Chen, the company’s chief scientist, the devices allow scientists to fine-tune every aspect of CNT production, from catalyst generation to final material processing, and are primarily used as research tools.

If cutting-edge research can open up paths to commercialisation - in applications such as computer chips, sensors and display units - it’s likely that a booming market could drive improvements in production to deliver lower costs. To that end, Bayer MaterialScience recently announced that it is looking to set up strategic business and research collaborations to develop novel applications for its CNTs. ’It’s going to be a bit of a "chicken and egg" situation,’ predicted Swan. ’You’ll have to make sure the market place is there before scaling up, but in some instances you have to scale up to make the market.’