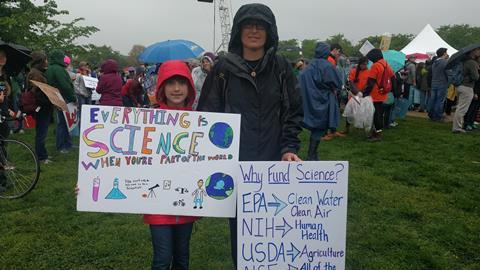 The March for Science movement is in turmoil and people close to the cause think that it’s time to call it a day. The organisation is facing allegations from its own volunteers that it is secretive and hierarchical, with leadership that is averse to sharing power and requires volunteers to sign non-disclosure or confidentiality agreements.

The organisation, which sprang up earlier this year in the wake of the successful global Women’s March, demanded that the White House and Congress support publicly funded research and base government policy on scientific evidence and research after fears that the election of Donald Trump would threaten this. March for Science is now accused of hiring one of the national co-chairs to a paid director position, despite a transition plan that specified they would be a volunteer, and refusing to disclose items about its management structure, financial information and donors.

The March for Science culminated on Earth Day in April when an estimated 150,000 scientists and science advocates took to the streets in Washington DC, and hundreds of thousands participated in 600 satellite marches around the world. More than six months later, key March for Science volunteers like former communications director Aaron Huertas have signed an open letter expressing serious concerns about the organisation. ‘We are concerned about ongoing issues related to transparency, undervaluing and mismanaging volunteer labour, and side-lining both diverse voices and the ways science relates to justice and equity,’ the letter reads.

In response, the eight-member board of the March of Science organisation said they are ‘actively working to investigate and address’ the issues raised in the open letter. ‘We’re not the first group of people to struggle with the transition from a moment to a movement, and there will surely be more bumps along the way,’ the board members wrote. ‘It’s our hope that our shared commitment to the vision of this work can help us work through these challenges and come out stronger on the other side.’

The March for Science cause is presently attempting to grow into a broader and permanent science advocacy organisation, and it reportedly filed to become a registered non-profit last month. However, many people who have been intimately involved in the cause are now suggesting that it should simply close up shop. They argue that there are many well organised institutions that are advocating effectively for science, including the American Association for the Advancement of Science, and say that is difficult to see what the March for Science is adding to these efforts.