Mars is the planet that never grew up

Mars, the magnificent Red Planet that has inspired a thousand science fiction fantasies, is just a baby - it has never grown up. Scientists in the US have analysed isotopes in meteorites that resemble Martian geology and have discovered that the planet stopped growing while its solar system siblings carried on developing. This would account for the fact that Mars is 10 times smaller than Earth.

Planets are thought to have evolved from dust particles that collided and stuck together, forming objects called planetesimals. These in turn coalesced to create ’embryos’, which further condensed with one another to form planets. 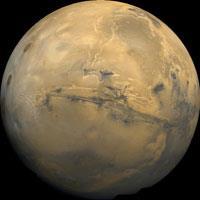 Each of these processes takes millions of years. But researchers have now shown that Mars stopped developing only 2-4 million years after the formation of the solar system. Earth, on the other hand, carried on growing normally until it reached ’adulthood’ about 50 million years later.

Nicolas Dauphas of the University of Chicago and Ali Pourmand, of the University of Miami, looked at isotope ratios in meteorites known to have a similar composition to the Martian mantle - the layer surrounding the core. They measured the decay of hafnium-182 into tungsten-182 using inductively coupled mass spectrometry.

When planetismals collide to form an embryo, the metal content of the incoming mass migrates to the core of the resulting body. So when an embryo is formed, it will have almost no metal within its mantle. If there is tungsten-182 in the mantle millions of years later, this will have come from the decay of hafnium, and so the age of the sample can be calculated. ’It is a very accurate tracer of what happens in the first few tens of millions of years,’ Dauphas tells Chemistry World.

The analysis showed that, after the formation of the solar system, Mars stopped growing 2-4 million years later. Earth, on the other hand, carried on accumulating mass for a further 50 million years. This would account for the puzzlingly small size of Mars - about a tenth the size of Earth. ’People have modelled the birth of the solar system and its evolution and would obtain objects that look like Mars but were 10 times bigger,’ says Dauphas. ’I think this new finding will change the way we see Mars. We used to think of it as a sister planet to Earth, but really we should think of it as an embryo, and something that was already formed before the Earth was made.’

’The formation timescale for Mars reported here is substantially shorter than estimates for the Earth, suggesting that Mars was largely put together and witnessed the very early evolution of the solar system, says Craig Agnor, who studies the theory of the formation of planets at Queen Mary, University of London, UK. ’This result provides important information about Mars’ formation and provides a constraint on this important era in solar system formation and evolution.’