The activity of 28 unique anti-fungal chemicals on the surface of a single species of seaweed has been deciphered for the first time with the help of high tech mass spectrometry imaging. The find boosts understanding of these compounds and how they might be used to combat human diseases such as cancer and malaria, say US scientists.

Previously, whole tissue analysis of Callophycus serratus - a red macroalgae found in tropical waters - had revealed these new chemicals, classed as terpenes. But without a method to work out the spatial distribution of the compounds on the seaweed’s surface, it was difficult to know how the chemicals worked as a defence mechanism. This was largely down to the fact that many important ecological interactions in the sea are either surface based, such as colonisation of host surfaces by larvae or spores, and/or occur at very small scales, such as microbial interactions. 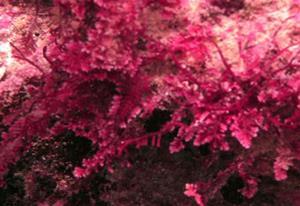 The red seaweed Callophycus serratus, which produces a large group of chemicals to protect itself against fungus infection

Now, using a mass spectrometry imaging technique called Desorbtion Electrospray Ionisation (DESI-MS), scientists at Georgia Institute of Technology, US, have overcome this problem. ’Plants and animals in the wild use chemistry as way to fight with one another,’ says Julia Kubanek, who led the team. ’Using this new technology, scientists can listen in on this fight to perhaps learn from what’s going on and steal some of the strategies for human biomedical applications.’

Former natural product chemist and a mass spectroscopist, Graham Cooks, from Purdue University, US is enthusiastic about the research: ’This simple direct interrogation of particular areas of a biological material by DESI-MS is spectacularly successful,’ he says.

The DESI-MS technique works by firing a jet of electronically charged solvent onto the seaweed surface. This gives the compounds an electric charge which then allows them to be sucked up from the surface like a magnet and delivered to the mass spectrometer for analysis.

The team expected to find the chemicals evenly spread over the surface like sunscreen on a person’s body. They were surprised, however, to discover microscopic patches that contain the potent anti-fungal chemicals, perhaps indicating tiny wounds on the seaweed’s surface.

’It is possible that the alga is marshalling its defences and displaying them in a way that blocks the entry points for microbes that might invade and cause disease,’ says Kubanek. The team studied two subpopulations of the same species and found two distinct groups of anti-fungal chemicals -18 unique to one group, and 10 unique to the other group. The chemicals may act in an additive way to prevent infection.

Around half of all anti-malarial and anti-cancer drugs are derived from natural compounds found in living organisms, and Kubanek points out that the marine environment is a largely untapped source. ’This work is a significant methodological advance for a whole range of crucial and widespread interactions in the sea,’ says Peter Steinberg, Director of the Centre for Marine Biofouling and Bio-innovation at the University of South Wales, Australia.

The team has already tested the seaweed compounds for their drug potential. So far, they have found them to be promising anti-cancer and anti-malarial compounds, though more work needs to be done to reduce toxic effects on healthy cells.