Meteorites are a chip off the old asteroid block

In what has been described as one of the most exciting results in cosmochemistry, scientists have for the first time directly analysed dust collected from the surface of an asteroid. The findings confirm that the most common type of meteorite found on Earth - ordinary chondrites - derive from so-called stony or S-type asteroids. This had long been assumed but until now never directly proved.

The dust - only the second sample of surface material directly collected from space, the other being from the Moon - was scraped off an asteroid called 25143 Itokawa by the Japanese Hyabusa space probe in 2005 and returned to Earth five years later. The asteroid, which is around half a kilometre long and 300 metres wide, was, at the time, some 300 million kilometres from Earth. 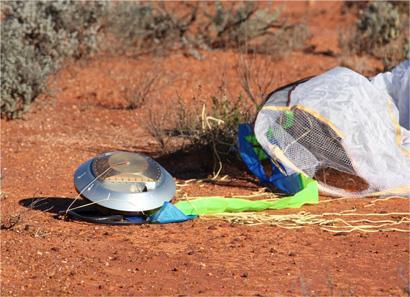 Now, in a series of papers published today in Science, the Japanese-led team reveal the results of a comprehensive analysis of the 1500 or so tiny particles, measuring between 3 and 180?m in size.

A record of the solar system

’The most important goal of the Hayabusa mission is to demonstrate that S-type asteroids are primitive solar bodies that record the early solar system history,’ says lead scientist Tomoki Nakamura of Tohoku University. ’For this we need to show that asteroidal material is identical to chondrite meteorites because we already know that chondrites are the most primitive materials in the solar system.’

Detailed analysis of the mineralogy and chemistry of the samples demonstrated unequivocally that S-type asteroids are the parent bodies of ordinary chondrites1,2. One key measurement was the oxygen isotope content of the particles, carried out by Hisayoshi Yurimoto’s team at Hokkaido University3. The oxygen isotope ratios of the sample were found to coincide with those of ordinary chondrites, providing compelling evidence that the materials have the same origin. ’This is a direct oxygen isotope link between chondrites and their parent asteroid,’ says Yurimoto.

Neutron activation analysis of samples showed that iron/scandium and nickel/cobalt ratios were the same as those found in ordinary chondrites4.

Chemical tests also revealed intriguing insights into how the asteroid is constantly buffeted by energetic particles such as solar wind - charged particles from the sun - and higher energy cosmic rays, as well as by micrometeoroids, processes collectively termed space weathering5.

This weathering is important because it can trigger nuclear reactions, creating noble gas nuclides, such as isotopes of helium, neon and argon. These isotopes would have been generated beneath the asteroid’s skin, so their presence in surface dust indicates that material is finding its way to the surface and is being lost - the asteroid is gradually shrinking6. 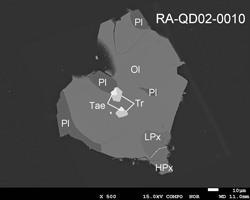 A typical Itokawa dust grain is mostly made of the mineral olivine, with small amounts of plagioclase, pyroxenes, troilite and taenite

Space weathering also affects the spectral properties of the asteroid and accounts for some of the anomalies between asteroidal spectral data and those from chondrites found on Earth.

’If solar wind protons hit the surface of a celestial body, they penetrate to around 10nm deep and also sputter a very thin surface,’ says Takaaki Noguchi of Ibaraki University. ’The sputtered materials condense on the surface again. If a micrometeoroid hits the surface, it gives an intense thermal pulse and this causes the vaporisation of the materials and impact site which will re-condense.’ These processes result in small metallic iron particles in the vapour deposition. ’Such small iron particles greatly affect the spectra of the celestial bodies,’ Noguchi says. The team’s close analysis of the particles accounts for the spectral differences and have solved this long-standing conundrum.

Sara Russell, head of meteoritics and cosmic mineralogy at the Natural History Museum in London, UK, says that the results confirm what cosmologists had long suspected. ’We had inferred that the vast majority of the 50,000 or so recorded meteorites came from asteroids but did not know for sure,’ she says. ’One of the first things you are taught as a geologist is that if you have a rock you need to know where it came from. This is the first returned mission from an asteroid and that is very exciting - to retrieve a sample and return it to Earth has been an absolutely amazing achievement and a fantastic proof of concept.’

Alexander Krot, a meteorite expert at the University of Hawaii, US, says: ’This is the first sample-returned mission from an asteroid and one of the most exciting results in the field of cosmochemistry that provide the first direct evidence of meteorite-asteroid connection.’