Researchers at Cornell University in the US have challenged prevailing fuel cell wisdom by throwing out three standard characteristics of today’s mainstream systems to drive down their cost. H?ctor Abru?a and Abraham Stroock’s team changed the fuel and oxidant chemicals used and the cell design that keeps them apart, getting power densities above 0.25 W/cm2. ’What we attain is extraordinary for a device that simple,’ Abru?a  tells Chemistry World.  ’Fuel cells for automotive applications are typically around 1-2W/cm2. It’s not that far off.’ 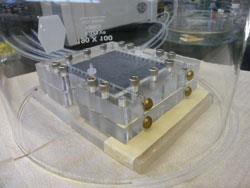 Usually, fuel cells produce electricity from hydrogen or methanol along with oxygen, separating them to create a voltage gradient with an expensive Nafion proton exchange membrane. While working in George Whitesides’ group at Harvard University, US, Stroock designed a microfluidic reactor in which two different solutions flow together but don’t mix. Abru?a says that this ’laminar flow’ allows completely new chemistries. His team pairs borohydride ions, which are stable under basic conditions, with cerium ammonium nitrate (CAN) as an oxidant. ’We have one compartment of acid and one of base,’ he says.  ’You couldn’t do that with a membrane. This opens up tremendous opportunities.’

Team member David Finkelstein notes that while borohydride use is increasingly being considered in fuel cells, conventional approaches can’t exploit it fully. ’People are fixated on using oxygen in the fuel cell because they see it as free,’ he says. ’But borohydride can put out orders of magnitude higher current densities than hydrogen or methanol, and the oxidant must keep pace. Oxygen can’t do it.’

Peter Edwards, head of inorganic chemistry at the University of Oxford, UK, and director of the UK sustainable hydrogen energy consortium, calls the work a ’highly important development’. ’By utilising borohydride as a high energy density fuel, they have overcome several of the major problems with using hydrogen,’ he says. ’The challenge now is to control the borohydride stability at the necessarily high concentrations to enhance power densities and efficiencies.’

Finkelstein underlines that although the team’s approach is far from commercialisation, its ideas could help find ways around barriers facing today’s technology. ’We are trying to show different types of useful fuel cell chemistries and novel flow geometries that haven’t been considered much,’ he says. Abru?a, in particular, concedes that their chemistry could not be used in large scale due to limited supplies. ’But for niche applications I think this could be very powerful,’ he adds, ’both literally and figuratively.’