New technique can tell left from right even at low concentrations 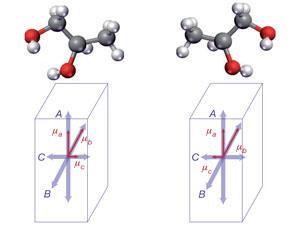 The chirality of a gas phase molecule held in an electric field can be revealed using microwave spectroscopy. Hooking the technique to a separation step might even be exploited to isolate a specific enantiomer from a racemic mixture of both forms.

Chirality, or handedness, is critical to chemistry and biology and the ‘wrong’ version of a drug molecule can function completely differently in the body. Quickly and definitively determining which chiral form of a molecule, which enantiomer, is present in a sample is an ongoing struggle in the laboratory. Techniques such as circular dichroism can be used but they exploit weak effects and are generally used with high density, liquid samples, which is not always possible with biological extracts and other samples. 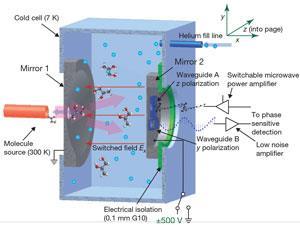 The international team of David Patterson and John Doyle of the Department of Physics at Harvard University in Cambridge, Massachusetts, and Melanie Schnell of the Centre for Free-Electron Laser Science in Hamburg, Germany, has turned to nonlinear resonant phase-sensitive microwave spectroscopy to reveal sample chirality. Microwave spectroscopy hinges on the ability of microwaves to rotate a polar molecule. It can reveal accurate figures for bond lengths and angles.

The team has been able to demonstrate proof of principle with gas-phase samples of S- and R-1,2-propanediol (both commercially available) and a racemic mixture of the two. The team cools the samples to 7 Kelvin to reduce the number of occupied rotational states and bathe the sample in an electric field that interacts with the electric dipole of the sample compound, with opposite signs for each enantiomer. This difference is reflected in the phase of emitted microwave radiation.

The researchers point out that circular dichroism, where it is applicable, can only resolve chirality in relatively simple systems. Their microwave approach, on the other hand, can extract chirality of a specific molecule even if there are many other chiral molecules in a sample. They concede that if a second molecule were present with the same frequency range then this would lead to ambiguities, but the likelihood of such a coincidence is very small given the narrowness of the range for any given chiral compound. Indeed, their technique will be viable for a wide range of polar molecules.

Laurence Nafie of Syracuse University, New York, suggests in a News and Views article accompanying the paper that if the research can be applied to previously unassigned compounds, particularly those of pharmaceutical interest, then the paper will be 'extremely important'. Even if that isn't the case, the unexpected spectroscopic work still represents 'a landmark in the 200-year-old history of optical activity in chemistry'.