Scientists have re-examined dried residues in 50-year-old vials from classic ’primordial soup’ experiments to glean new information about how life originated on Earth.

In 1953, Stanley Miller and Harold Urey, at the University of Chicago, conducted a series of iconic origin-of-life experiments where they showed that a spark discharge, representing lightning in Earth’s early atmosphere, could trigger synthesis of amino acids in flasks holding only a mixture of reducing gases - methane, ammonia and hydrogen - and water. 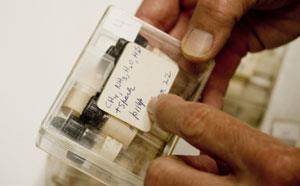 A team of US and Mexican researchers, led by Jeffrey Bada at the Scripps Institute of Oceanography in California, analysed the contents of 11 vials belonging to Miller after the chemist’s death in May 2007, and identified 10 amino acids he had not previously recorded.

According to Bada, who inherited the entire contents of Miller’s lab, the late chemist saved an extract from virtually every experiment he ever did. But Bada didn’t realise until recently that his mentor had stashed away vials from his most famous experiments in an old cardboard box.

Bada was alerted to the vials by one of his co-authors, Antonio Lazcano. ’When Antonio told me this, I said, "You’re kidding me." I went right back to my lab, found these boxes and inside were all of these carefully marked vials that were clearly from his experiments in 1953 and 1954,’ says Bada.

The residues producing new amino acids, says Bada, were from a modified set-up of the apparatus, never since replicated, which mimicked lightning in a steam-rich volcanic eruption. This set-up had a nozzle attached to the "soup" flask which shot a jet of hot steam into the spark.

The steam, says Bada, generated hydroxyl radicals, which combined with amino acids or their precursors to produce a different suite of compounds from those in the textbook experiment, including several hydroxylated amino acids. ’These are interesting because they’re quite reactive in their own right. We don’t know what kind of role they played but they add a new component to the prebiotic soup,’ he says. 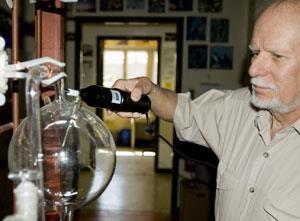 It is widely accepted that the gases Miller used did not accurately recreate conditions on early Earth - carbon dioxide and nitrogen were probably the main components of the atmosphere. However, the researchers think their results show that volcanoes were important local centres for the synthesis of organic molecules that preceded life.

Andr? Brack, an expert in the chemistry of the origins of life who works at France’s CNRS centre for molecular biophysics, Orl?ans, says the research proves Miller was a great chemist who did experiments that are relevant even today. But whilst he agrees that volcanic effects were important, he still favours atmospheric synthesis. ’Early Earth had a lot of volcanoes, but we should not throw away this hypothesis of having prebiotic molecules made in the atmosphere,’ he says.