Scientists in Australia and New Zealand have used three-dimensional computational modelling to reveal the dynamics of food breakdown and flavour release during human chewing. The model can incorporate equations representing mechanical properties, and physical and chemical changes to build up a picture of human mastication.

In recent years, increasing health concerns related to the formulation of processed foods has left food producers with the task of reducing components such as salt, sugar and fat whilst retaining a sensory pleasing food product for the consumer. By computationally modelling mastication, scientists hope to simulate sensory stimuli to predict consumer perceptions of food as they eat. 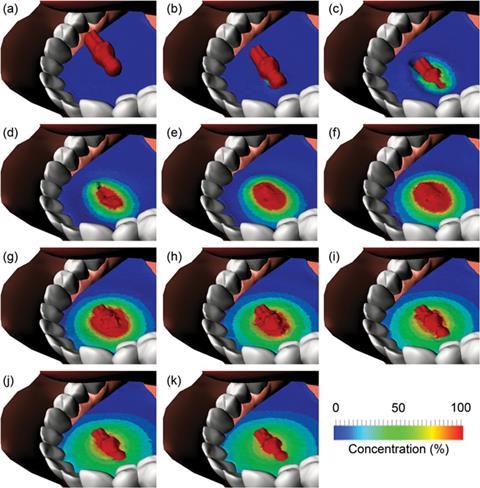 Simon Harrison, from CSIRO, the Australian national science agency, and colleagues used a computational method called biomechanical-smoothed particle hydrodynamics, which is new to food science. The simulation method performs complex calculations to model the human mouth, its movements and different types of food. ‘Food stuffs with different structures require different physics calculations to be solved,’ says Harrison. ‘We started modelling foods with simple mechanical properties, such as jelly babies, because they have homogeneous mechanical properties and aren’t affected by wetting by saliva or heat from the mouth as much as other foods.’ In order to explore inhomogeneous foods, like chocolate covered caramel where the chocolate softens through thermal effects, the group had to solve even more equations in 3D.

However, simulating human mastication is complicated. ‘Accurately representing the geometry and motions is extremely difficult,’ explains Harrison. ‘We pulled together data from many sources to construct the best anatomical model possible, but there are challenges remaining in representing all key aspects of human anatomy and behaviour during chewing.’ 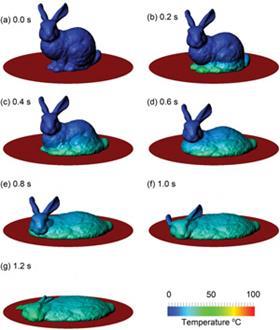 Temperature based softening of a chocolate rabbit on a hot surface

‘If a snack chip is crisp and crunchy then we enjoy it, but if it is soft then we think it is stale. This crispness or crunchiness is a texture sensation, which is important for our enjoyment of the food. However, the crispness also affects how the flavour is released. If the food breaks into many pieces quickly then the food particles have a higher surface area on which taste and aroma compounds can be released,’ says Harrison. ‘The model that we are developing is helping to quantify these effects and understand how we can slightly change the food structure for improved sensory enjoyment.’

‘Despite the approach being at an early stage for practical applications, the potential impact could be huge for industrial R&D research,’ comments Jianshe Chen, an expert in food science from the University of Leeds, UK.

The team hope that the work will stimulate experimental work in the field. They aim to use their comprehensive modelling to build a greater understanding of how food structure affects digestion, sensory perception and health.