Quantum modelling is helping explain how protons are transported through the polymer membranes used in fuel cells.

Researchers have applied a combination of classical and quantum mechanical modelling to demonstrate the key role that water plays in the conductivity of polymers used in fuel cell membranes. The work provides new insights into the way protons are transported through polymer membranes and could help in the design of efficient and durable fuel cells in future. 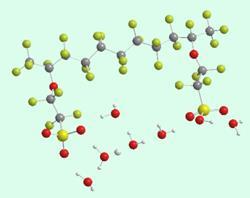 Hydrogen gas in a hydrogen fuel cell is catalytically split into protons. These diffuse across a polymer membrane and combine with oxygen to produce electricity and water. Membranes must retain moisture in order to conduct protons. This requires the fuel cell to operate at inefficiently low temperatures to prevent the membranes from desiccating. Understanding how protons are transported through the membrane and the role water plays in the process is key to developing the next generation of polymer membranes.

The polymer is typically made from a fluorinated carbon backbone with side branches at intervals that terminate in sulfonic acid groups. James Elliott at the University of Cambridge, UK, and Stephen Paddison at the University of Alabama, US, are getting unique insights into the conductivity of these polymers. They modelled conductivity along a simple, linear polymer system with varying distances between the side chains.

The researchers discovered that the polymer backbone was prone to spontaneous distortions due to associations between adjacent sulfonic acid groups, and that these changes in conformation had a potentially profound effect on the overall conductivity within the system.

’We used classical modelling techniques to compute the conformation of the backbone, and then applied sophisticated, new quantum mechanical models to the clusters of hydrated sulfonic acid groups,’ said Elliot. ’It is clear that conduction of protons within these systems is not a classical process but that the hydrated protons hop amongst the water molecules aggregated around the side chains.’

The researchers are now extending the complexity of the models to realistically sized polymers with multiple side chains and hundreds of ion exchange sites. ’Ultimately we would like to be able to predict the effect of how changes to the backbone or side chains will affect proton transport, and apply this knowledge to the design of more efficient membrane systems,’ Elliott says. Simon Hadlington