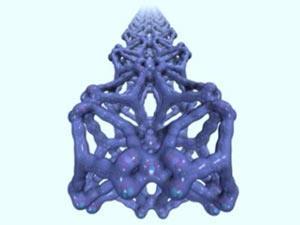 Highly porous materials being developed as future fuel tanks for hydrogen- or methane-powered vehicles could hold much more gas than previously thought. Researchers in the US and the UK have shown that the theoretical maximum internal surface area of metal organic frameworks (MOFs) per gram of material is about 40% higher than previous studies had suggested. Using their theory, the team has produced two new MOF materials with the highest internal surface area per gram – and therefore gas storage capacity – ever recorded.

MOFs are crystalline, microporous materials made up of organic linkers held together by metal atoms, forming a repeating molecular cage-like structure ideal for storing gases. Until now, the best MOF materials had surface areas of around 6000m2/g – the bare minimum required to build a gas tank for a hydrogen- or methane-powered car, says Joseph Hupp, who jointly led the research at Northwestern University, Evanston, US.

‘If you had asked me two years ago, I’d have said that we were approaching some limit and that maybe we’d never get to the number that we needed to make this work,’ says Hupp. MOFs were beginning to approach the theoretically predicted surface area ceiling of about 10,000m2/g.

Hupp and colleagues have now shown that, by modifying the structure of their organic linkers, much higher surface areas per gram of material are possible. To date, these linkers have typically consisted of strings of benzene rings, but gas molecules are only able to adsorb onto the ring’s outer surface, making the inside of each benzene unit effectively wasted space. The team realised that by switching some of the benzenes in their linkers for straight chain acetylene groups, in which both sides are available for gas adsorption, much higher surface areas should be possible.

Computational studies support the theory, predicting that the maximum surface area of a MOF with acetylene-based linkers would be 14,600m2/g. Using these new linkers, the team then synthesised two new MOF materials with surface areas greater than 7000m2/g, smashing the previous record.

‘Hopefully this will energise folks who’ve been working on this problem for a while – that seemingly absurdly large surface areas are plausible,’ says Hupp. ‘We realised with these simulations that, even when we got to 7000m2/g, we weren’t even halfway there yet.’

The work should spur the development of the next generation MOFs with even higher surface areas, says Deanna D’Alessandro, who researches new MOF materials at the University of Sydney, Australia. ‘The predictions made in this paper are pretty startling and they have the experimental data that this is definitely a true and real effect,’ she adds. ‘It provides a real benchmark for how to design new MOFs with even higher surface areas.’

Hupp and his colleagues add that other linker motifs might conceivably have even higher maximum surface areas per gram of material – for example, by swapping carbon connecting atoms in the linker for other, lighter atoms.