Scientists have laid the foundations for a high-performance ’molecular fridge’ capable of reaching temperatures within a few thousandths of a degree of absolute zero (0K) with a high degree of efficiency. Such ultracoolers could have applications in areas such as ultra-low temperature physics, where alternative technologies such as those that rely on expensive and rare helium-3 could be unsuitable or too costly. 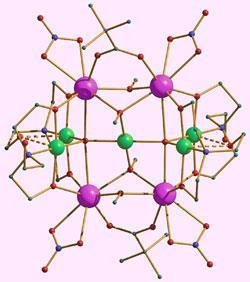 Molecular structure of the gadolinium and copper complex

To produce the required high magneto-carolic effect, the team used an ion consisting of five copper atoms and four gadoliniums - a system with multiple unpaired electrons in the appropriate spin state.

’But once you start joining these individual ions together into a large molecule, there is a problem,’ says Brechin. ’Ninety-five per cent of all metal-metal interactions are antiferromagnetic - their magnetic moments cancel each other out.’

So the challenge was to retain the electronic and magnetic integrity of the individual ions while incorporating them into a molecule capable of being processed. ’The key is to use organic connector ligands,’ says Brechin. ’We use a polyalkoxide - when it is deprotonated the oxygens can bridge the metals. We are almost making a metal oxide but are stopping growth by encapsulating the metal centres in an organic shell.’ This produces a crystalline material consisting of discrete molecules, each retaining its important characteristics. When a magnetic field is removed, significant temperature reductions can be achieved at the molecular level and hence in the whole material.

’When we change the magnetic field by 1 tesla the temperature falls by 2 kelvin,’ says Brechin. ’This is a very big drop. So if you take the sample material down to 4K by conventional means, you can then take it to very close to absolute zero extremely efficiently.’

Commenting on the research Eric McInnes, an expert in low-temperature magnetic refrigerants at the University of Manchester in the UK, says, ’This new material adds to the growing family of magnetic cluster compounds that show considerable promise for low-temperature cooling applications, but it raises the bar for the potential level of performance.’