Wildfires spread frighteningly fast, but thankfully not at kilometres per second pace. That’s the rate at which heat rips through a molecule, US chemists report. Dana Dlott and his colleagues from the University of Illinois at Urbana-Champaign found it took only a few picoseconds for heat bursts to travel along hydrocarbon chains. Their measurements may help researchers develop molecular electronic devices which can dissipate such disruptive heat flows.

When an electron is transported through a molecular wire, some of its kinetic energy (up to 50 per cent) transforms into heat, which can affect the efficiency of tiny machines. ’Heating under operating conditions is an acute problem in next-generation electronic nanodevices,’ Abraham Nitzan, a chemist at Tel Aviv University, Israel, told Chemistry World. ’To measure the corresponding temperature change on a molecular scale, we need a suitable "thermometer", and Dlott and co-workers have essentially invented such a device,’ he said.

The familiar concepts of heat diffusion don’t apply at the molecular level. Instead, chemists have to track the increasing molecular disorder induced by thermal energy. Dlott’s team used an ultrafast flash thermal conductance apparatus to study heat flow through a system composed of a self-assembled monolayer of hydrocarbon molecules of the form HS-(CH2)n-CH3 attached via sulfur bonds to a gold substrate. They applied a picosecond laser pulse to heat the gold substrate to about 800?C and then measured the rate at which the thermal energy reached the methyl (CH3) end of the chains. To do this, they employed a vibrational spectroscopy method - called sum-frequency generation - which is capable of selectively probing the thermal-induced disorder at these terminal CH3 groups. 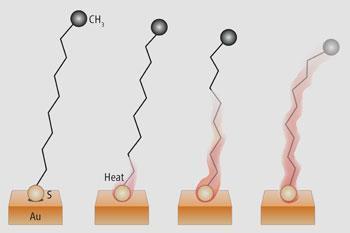 According to Dlott, the study of heat-transport processes at the molecular level has been limited because no appropriate techniques were available to carry out measurements over short distances, short time intervals, and large temperature bursts. ’With our method,’ he told Chemistry World, ’we were able to measure heat-flow velocities of up to one nanometer per picosecond.’

Though different techniques have been considered before, this is an entirely new method with great potential, Nitzan said. The US team found that heat moves at a constant velocity through the molecules and calculated a thermal conductance of 50 picowatts per degree Celsius. They hope their results could help in understanding heat dissipation at the molecular level and will contribute to find ways of getting rid of the heat, thus improving the stability and performance of nanodevices.