Scientists can now see atoms reacting on the femtosecond timescale in unprecedented detail, thanks to a technique developed at the University of Ottawa.

Canadian scientists have observed the photodissociation of bromine molecules using femtosecond laser spectroscopy. They can follow the extreme ultra-violet (EUV) radiation that the laser causes the dissociating molecules to emit down to accuracies of 0.5 attoseconds, or 5x10-19 seconds. ’We can see the atoms move and we can tell where they are at different times,’ said Paul Corkum, who leads the Canadian National Research Council’s femtosecond science groups. ’We measure everything we could possibly know, and we’ve made an incredibly sensitive technique,’ he says.

The Ottawa team uses an intense femtosecond laser to rip electrons away from their atoms, and then force them back in. As the electrons recombine with their atoms, they emit EUV light in a process known as high harmonic generation. ’The process happens really, really fast so that everything is frozen in that time, except the motion of the electron,’ Corkum explains. However the laser is not selective in which atoms it interacts with. If only a few molecules in the sample being analysed are dissociating, this means that the resulting emission can contain a very weak signal from the reaction. 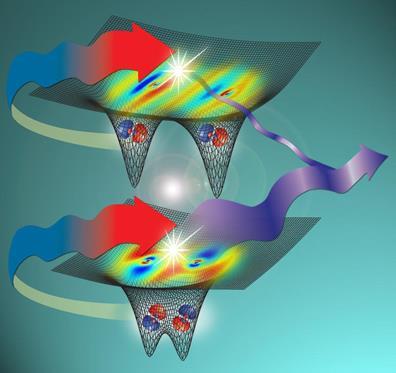 A strong laser field pulls electrons out of both molecular (lower image) and dissociating (upper image) bromine molecules and drives it back to the molecule (red arrows). When the electrons collide with the molecule, they emit an extremely short burst of X-rays (purple arrows). The two emissions interfere, providing an extremely sensitive measurement of the breaking bond

Corkum and colleagues have now been able to isolate this weak signal, thanks to the fact that the different light waves emitted by the molecules are coherent - that is, that their relative phases remain constant.   They can therefore interfere, with the signal from the unreacting molecules creating a fixed background to watch the dissociation against. ’We only trigger just a few molecules to undergo a chemical reaction,’ Corkum explains. ’The fact that the light they emit is perfectly coherent allows us to see a weak signal in the presence of many, many, unexcited molecules.’ The team is now investigating more complex systems using the same approach, but Corkum hopes the technique will also be useful to other chemists.

Stephen Leone, director of the chemical dynamics beamline at the US Lawrence Berkeley National Laboratory, says that the approach could help to unravel electronic orbital dynamics during molecular dissociation. ’The interpretation of time-resolved high harmonic spectral signals, once they become routine and applicable to larger systems, will be a powerful addition to the arsenal of dynamical techniques used to study molecular electronic processes,’ he added.