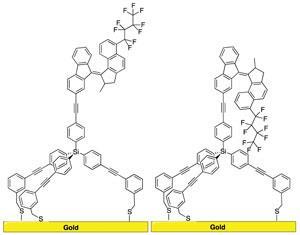 Water droplets whose shape mysteriously shifts when the surface underneath them is exposed to light could become nanotech-powered chemistry vessels. Ben Feringa and co-workers at the University of Groningen in the Netherlands controlled these subtle yet promising changes through light-activated synthetic molecular motors. The researchers rotate water-repellent substituents around the motors’ axles, and Feringa tells Chemistry World the next step is moving the water. ‘You can imagine droplets filled with reagents that move and merge at your command,’ he says.

Feringa’s team has developed light-switched molecular motors consisting of two bulky, chiral, chemical groups connected by a carbon–carbon double bond ‘axle’. Light flips one group around the axle, switching between cis- and trans-isomers. Due to their chirality, after the flip the bulky groups initially clash, before heat bends them into a stable configuration. That second, stabilising, step is a ratchet that means the motors spin just one way.

Right from the outset Feringa imagined materials coated in armies of these molecules, moving cargo according to his direction. However, electronic interactions with surfaces they were linked to made it harder for the motors to flip. Early two-legged anchor designs also let them crowd together too closely, interfering with each other like a molecular slapstick act.

Now the Groningen researchers have given their motors longer, rigid, tripod anchors that distance them from the electronic ‘surface quenching’ problem, and each other. On the opposite end of the axle, they’ve also put a fluorinated superhydrophobic group. Depending on the state of the motor, when coated onto a gold film this water-repellent group may either face the outside environment or hide from it.

To test their films, Feringa’s team tracked water droplets’ shape while shining ultraviolet light on them over a period of two hours. The contact angle where the drop meets the film, which indicates the attraction between the liquid and solid, was 60° when the water-repellent group was hidden. When the scientists flipped the motor the angle grew to 82°. Feringa says that beyond using droplets as vessels to do chemical experiments in, going on to move water could also be useful for biomolecule sensors.

Rafal Klajn, who develops molecular motors at Weizmann Institute of Science, Israel, calls the Groningen team’s new molecules ‘a brilliant piece of molecular design’. ‘It will be interesting to see how well these new functional surfaces perform in terms of light-driven liquid motion,’ he adds.