US researchers have created a range of new chemical ’sponges’ that could be used to soak up carbon dioxide from power stations. The porous compounds belong to a class of material called metal organic frameworks which consist of metal atoms connected by organic linker molecules.

Rahul Banerjee and colleagues from the University of California at Los Angeles and Arizona State University made 25 new compounds by a ’high-throughput’ process in which thousands of different permutations of metal and linker were reacted together.

The US researchers focused on zeolitic imidazolate frameworks (ZIFs) which are similar to aluminosilicate zeolites - microporous structures widely used as molecular sieves and catalysts. In ZIFs, cobalt or zinc atoms are joined together by a variety of linkers based on imidazolates - cyclic molecules containing two nitrogen atoms that co-ordinate with the metals to give tetrahedrally connected frameworks. 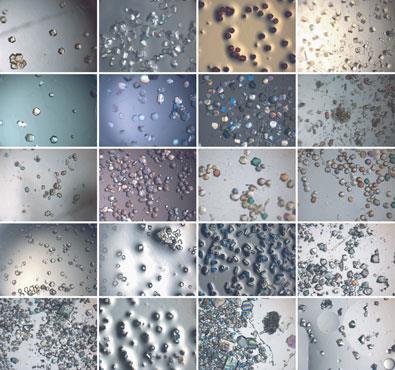 Photographs of ZIF crystals (0.1 to 1mm)

’We started making ZIFs by traditional bench chemistry with a flask of metal ion solution and a flask of organic linker solution and putting them together but this is extremely time consuming,’ Omar Yaghi, one of the leaders of the research group, told Chemistry World. ’So we thought that by using high-throughput we could help to discover more phases of these materials faster.’

The team ran 9600 individual reactions in tiny volumes, using multiple permutations of one or two of a suite of imidazolate linker molecules together with either zinc or cobalt ions. The crystals formed in the reaction wells were analysed by high-throughput x-ray powder diffraction and single-crystal x-ray diffraction. After the process, the team were left with 25 new crystal structures with a wide range of geometries.

"In the last 25 years only 12 ZIFs have been made. In just three months we made more than double that number" - Omar Yaghi

’In the last 25 years only 12 ZIFs have been made,’ Yaghi said. ’In just three months we made more than double that number.’

Some of the new ZIFs were shown to have enormous internal surface areas - more than double that of most porous zeolites. These compounds were also shown to be able to selectively remove CO2 from mixtures of gases and to store more CO2 than the activated carbon systems that are used at the moment.

Paul Wright, an expert on zeolite chemistry from the University of St Andrews in the UK said that the new ZIFs ’display very promising materials properties, including high chemical and hydrothermal stabilities, large adsorption capacities ... and functionalisable internal surfaces’.