Chemists in the US have created a molecule that closely resembles the key active portion of molybdenum disulfide, an important solid industrial catalyst that shows promise for the generation of hydrogen from water. There are relatively few catalytically active sites on molybdenum disulfide crystals, so a molecular analogue could lead to a catalyst with similar chemistry but a higher density of active sites. In addition, a molecular mimic can be experimented upon more easily, to improve efficiencies and unpick the catalytic mechanism - something that is still unclear for MoS2. 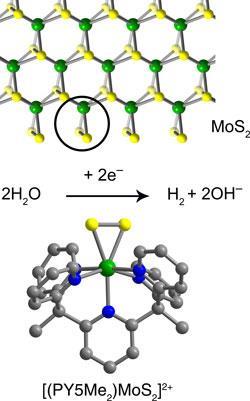 Catalysts that boost the electrolysis of water to produce hydrogen form a key part of renewable energy strategies for the future. For example, excess solar-generated electrical energy could be stored as hydrogen. The ore molybdenite - molybdenum disulfide - is one catalyst that could be a low cost alternative to platinum for the electrochemical generation of hydrogen from water. MoS2 is a layered structure, consisting of large, plate-like crystals. Studies suggest that the catalytic sites reside at the edges of these crystals and consist of an atom of molybdenum at the apex of a triangle made with two sulphurs. However, there are relatively few of these sites in the material.

’We have shown that it is possible to make the MoS2 unit as a molecular species,’ says Jeffrey Long, a member of the research team at the University of California, Berkeley. The researchers had been experimenting with the catalytic properties of complexes of molybdenum with the ligand PY5Me2 [2,6-bis(1,1-bis(2-pyridyl)ethyl)pyridine]. ’It was a little serendipitous,’ says Long. ’We had been looking at making an oxo-complex, where a molybdenum was attached to a single oxygen. We wanted to replace the oxygen with a sulfur, but instead of obtaining the monosulfide we got the disulfide.’

The triangular arrangement of the molybdenum with the two sulfurs was found to be almost identical to that in MoS2. Upon electrochemical reduction the molecule was shown to catalytically generate hydrogen from acidic water.

’With a single molecule we can start to look at intermediate species to begin to understand the reaction mechanisms of the system,’ says Long. ’We can also experiment with the ligand to see how it affects catalysis.’ Such modifications could eventually result in more efficient catalysts.

Edman Tsang, who researches the catalytic generation of hydrogen at the University of Oxford, UK, says: ’In terms of atom efficiency, it is great to tackle catalysis with precision at the atom level, as there is no waste in material.’ Tsang urges caution, however. ’The chemical environment in proximity to the edge site, if it is involved, may not be easily mimicked by organic ligands. The long ongoing debate on the difference between molecular and solid catalysts may apply here.’