A new type of molecule made up of ‘superatoms’ might now be possible thanks to researchers in the US who have built diatomic and triatomic molecules from well-defined clusters of metal atoms. The tuneable electrochemical and other properties of these superatomic molecules could open up applications in catalysis, energy conversion and storage. 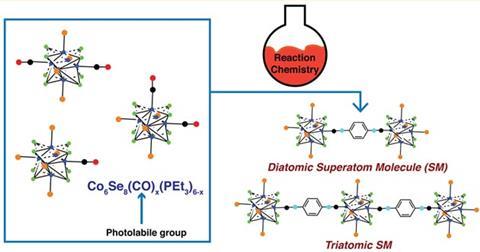 Structured clusters of metal chalcogenides, capped with passivating ligands, provide a new example of a so-called superatom, a nanoscale cluster of atoms that behaves as a single atomic entity. In the past, superatoms have been made by cooling vapours of sodium and aluminium, and more recently researchers have been trying to use them to make bigger, molecule-like structures. To date, most of the efforts to build superatomic molecules exploit recognition and self-assembly processes rather than more traditional synthetic schemes.

Now, Colin Nuckolls and colleagues at Columbia University have shown that they can make simple molecules from capped clusters of cobalt selenide. They focused on three basic Co6Se8 superatom building blocks – two with a carbonyl group in a cis- or trans-arrangement, and the monocarbonylated superatom – as the fundamental blocks with which to build diatomic and triatomic structures. The superatoms have the general formula Co6Se8(CO)x(PR3)(6–x). The team says these superatom molecules have a well-defined surface definition and bonding, just as you might find in a conventional molecular structure made up of atoms plucked from the periodic table. They also explain that they can swap any number of the carbonyl (CO) groups for isocyanide or phosphine moieties, which allows them to control the type and length of the chemical bridge between the superatom centres. As such, they can modulate coupling and so control the electrochemistry in these species.

Lee Cronin of the University of Glasgow, UK, has worked on using similar building blocks to create systems with novel properties. ‘I’m excited to see this work and see how inorganic super molecules capable of new physical processes might be developed, for example hydrogen evolution and storage,’ he tells Chemistry World. ‘The notion that these systems could be called superatoms is intriguing and I’m looking forward to seeing the follow up work whereby the promise of these new types of molecules are realised.’