More sex and grapefruit to keep you young?

Scientists have shown that feeding a simple polyamine called spermidine to worms, fruit flies and yeast significantly prolongs their lifespan. In addition, adding spermidine to the diet of mice decreased molecular markers of ageing, and when human immune cells were cultured in a medium containing spermidine, they also lived for longer.

Spermidine - a simple linear molecule found in large quantities in human sperm and grapefruit - is known to be necessary for cell growth and maturation, and as cells age their level of spermidine is know to fall. Now, Frank Madeo from the University of Graz in Austria and his colleagues have shown that simply feeding certain organisms and cells with the molecule significantly increases their lifespan.

When yeast were cultured in a medium rich in spermidine the cells lived for three to four times longer than without the spermidine; human immune cells lasted around three times longer; fruit flies and microscopic nematode worms lived for around 30 per cent longer when fed a diet rich in the polyamine; and mice fed on spermidine showed a strong reduction in the amount of protein damage associated with ageing. 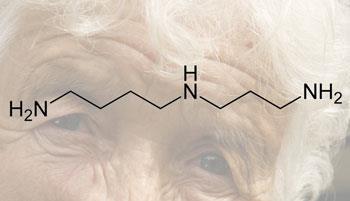 It seems that spermidine exerts its influence at the level of the cell’s mechanism for dealing with damaged internal components. Throughout a cell’s life, proteins and other molecules become damaged by exposure to environmental factors such as UV light or oxidants. This debris is swept up and deposited into a biochemical recycling bin. However, as cells age this clean-up process, called autophagy, becomes less efficient and ultimately the accumulation of this waste causes the cell to trigger its own suicide.

Autophagy is ultimately controlled by genes being switched on and off. It appears that spermidine inhibits a protein in the cell’s nucleus that is involved with controlling the genes for autophagy.

Richard Faragher, an expert on cellular ageing at the University of Brighton in the UK, says that the new work ’is interesting because it adds to the growing body of data suggesting that ageing is caused by a general failure of recycling.  It also suggests that small molecule interventions will work in the future. In short it tells us that ageing needs chemistry.’

So has Madeo’s team discovered the elusive elixir for eternal youth? ’I think I would be cautious about that,’ Madeo laughs. ’Clearly we have to do a lot more research to discover if it can have a direct effect on ageing in humans. But what is interesting is that spermidine is a natural compound which probably has no side effects. Humans are exposed to spermidine in quite high concentrations during sexual intercourse. Also grapefruit contains high concentrations, so natural sources are available. People could try to stay young by eating a lot of grapefruit and having a lot of sex - it might not work but I don’t think it would do much harm.’