Mouldable thermosets get a makeover 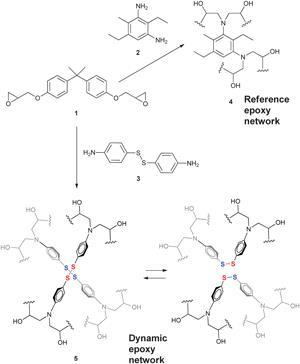 Researchers in Spain have developed a thermoset material that’s more than a one trick pony. The new material can be repaired and recycled, and has been incorporated into fibre-reinforced polymer composites.1

Fibre-reinforced polymer composites can replace metals in various sectors, such the air and automotive industries, which need strong, lightweight materials. To achieve a high level of mechanical performance, a thermoset polymer, typically an epoxy resin is required. But reshaping or dissolving these thermoset composites is not possible after curing, making repairs and recycling problematic.

Ibon Odriozola and his group at the CIDETEC Centre for Electrochemical Technologies have already made a thermoset-based material with the reprocessability of a thermoplastic, thanks to its reversible aromatic disulfide crosslinks.2 This was a soft polyurethane-based material, useful in applications such as adhesives. However, Odriozola says ‘we were also thinking [about] stronger materials, more structural materials, and at that time we came up with the idea of using this in epoxy chemistry.’

Their new material is much stronger but also easy to make. Combining an epoxy monomer with a commercial amino hardener produces an epoxy resin. Substituting this hardener with 4-aminophenyl disulfide, for example, produces a dynamic epoxy network due to its disulfide bonds exchanging.  In tests, reshaping or repairing this epoxy vitrimer was possible – by applying heat and pressure – without a loss in mechanical performance. It could even be ground to a powder and hot-pressed into a recycled film. The group also prepared and tested a multi-layered carbon-fiber reinforced composite based on their vitrimer with similar success, even molding 3D parts from a 2D laminate – a feat not possible with conventional epoxy composites. As the replacement hardener is commercially available and the basic process is unchanged, Odriozola believes that scaling up to industrial levels should be relatively simple, with the reprocessability permitting high volume mass production.

Filip Du Prez, a polymer chemist at Ghent University in Belgium describes this as an elegant process to produce a vitrimer system for industry. ‘The use of this new generation of lightweight materials could have a tremendous impact in numerous application fields.’

Odriozola’s group is now collaborating with several industries to bring the work to market.