Moving the goalposts for MRI

A new class of MRI (magnetic resonance imaging) contrast agents developed by scientists in the UK is promising to deliver clearer images in less time. ‘In any NMR experiment you are chasing sensitivity. We have enhanced the intrinsic ability to observe an MRI probe signal by a factor of 20,’ explains David Parker of Durham University who led the study.

MRI is used in clinical settings to image the inside of the body. It uses strong magnetic fields and radio waves to probe the behaviour of nuclei that possess nuclear spin. Chemical shifts from proton NMR normally fall between 0–12ppm but water and fat resonate at 4.7 and 1.3ppm, respectively, and can overlap with MRI probe signals. Parker’s new probes shunt the spectral window of MRI scans well away from these interfering signals, a concept he describes as ‘moving the goalposts’. The probes consist of lanthanide complexes with a t-butyl group and the distance between the lanthanide and t-butyl group was fixed to optimise the rate of decay of the t-butyl signal as well as move its chemical shift. Data acquisition was possible just a few minutes after administering the probe and the signal from the lanthanide induced relaxation of the nine protons in the t-butyl groups has been shifted by up to 80ppm. 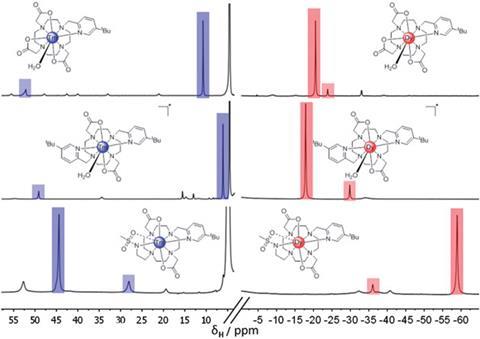 Janet Morrow, who develops inorganic complexes for MRI imaging at the University of Buffalo in New York, US, says the study is ground-breaking because it shows that lanthanide-based paramagnetic chemical shift agents can be imaged at concentrations typically used for gadolinium contrast agents. ‘They have carefully considered intramolecular nuclear relaxation rates and coordination chemistry to optimise the complexes for imaging.’

Another advocate of the work is Kenneth Raymond, an inorganic chemist at the University of California, Berkeley, in the US: ‘their careful choice of lanthanide and ligand system can enhance acquisition time and sensitivity, which in turn necessitates lower contrast agent dosages and results in better sensitivity.’

Parker is confident the combination of the probes’ speed with their superior levels of sensitivity could lead to the development of new imaging experiments in which the probes can localise for defined periods of time in particular regions of the body.