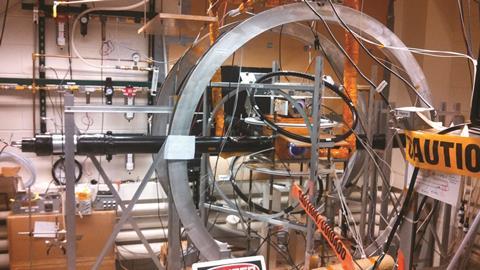 US scientists have developed a high-resolution medical scanning method that could overcome shortcomings in the widely-used magnetic resonance imaging (MRI) technique. Inventors Gordon Cates, Wilson Miller and their University of Virginia team, believe it might potentially pick out groups of individual cells or molecules, something MRI cannot do today.

Their polarised nuclear imaging (PNI) method has the potential to be integrated into MRI scanners, or enable cheaper dedicated equipment. ‘It’s a way of imaging that simply didn’t exist before,’ Cates tells Chemistry World, though he admits ‘we’re not ready to start doing people’.

Central to both MRI and PNI, nuclear spin literally describes the rotation of nuclei, although quantum mechanics means that they have only specific ‘quantised’ values. MRI usually aligns hydrogen atoms’ nuclear spin using a magnetic field, and then tips them over with radio waves and magnetic pulses. The nuclear spins then ‘precess’, like a spinning top rotates at an angle just before coming to rest, emitting radio waves that, after being detected and processed, can form an image.

Hyperpolarised gas imaging involves noble gases that emit radio waves at different frequencies to hydrogen. If patients inhale these gases ‘you can make exquisite MRI images’ of their lungs, Cates explains. Xenon dissolves particularly well in blood, and he had thought it might help see other organs better, but struggled. ‘If you’re looking far from the lungs, the signal is not great,’ Cates says. He therefore sought ‘a huge enhancement’.

Miller, Cates and their colleagues therefore turned to gamma ray emissions from radioactive elements, which are much easier to detect. They realised that radioactive nuclei with spin values greater than ½, like metastable xenon-131, only emit gamma rays in certain directions.

In PNI, after laser polarisation, the scientists precess the aligned xenon nuclei with radio waves and a 6 Gauss magnetic field. For comparison, Earth’s magnetic field is 1 Gauss, and MRI machine fields range from 5000–30,000 Gauss. Having detected gamma rays, the scientists could calculate where they were emitted from, and therefore create an image.

Cates suspects MRI and PNI could merge, but also imagines imaging ‘that no longer requires the huge magnetic field and expensive equipment’. He adds that tracers offer ‘the opportunity to use magnetic resonance in places you never would have before’. For example, molecules containing radioactive atoms could seek out specific targets in the body.

Laura Harkness-Brennan from the University of Liverpool, UK, underlines that new tracers will definitely be needed, as we’ll have to consider how our bodies process them and what radioactive dose patients will receive. Nevertheless, she says PNI’s high resolution and high sensitivity are ‘exciting and novel’.

Mara Cercignani from the Brighton and Sussex Medical School in the UK echoes that outlook. ‘MRI can offer very detailed anatomical images, however, techniques based on MRI that target a specific cell or molecule are quite far from being feasible,’ she says. ‘Nuclear medicine that uses gamma-ray cameras offers high specificity but typically low anatomical resolution. Combining the two is appealing.’ However, she stresses the PNI study is ‘very preliminary work’. ‘It takes about 60 hours to obtain a 2D image. It will take time to demonstrate usefulness.’

Cates realises the challenge of imaging ‘living creatures instead of glass cells’, but highlights that there are 100 or more different radioactive nuclei to try. ‘Some would be suitable, one would hope,’ Cates says.