Bumblebees could be more susceptible to insecticide residues than previously believed, according to new research from the UK. The study, in which colonies of bees were exposed to two classes of insecticide and observed for several weeks, showed that long-term exposure to the two insecticides had a significant impact on the colonies, causing reduced efficiency in foraging and an increase in the death rate. 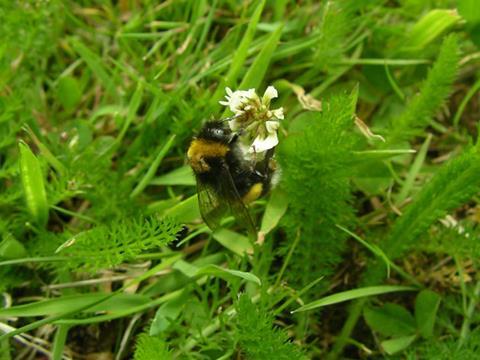 For bumblebees in the wild, exposure to a cocktail of insecticides causes more problems.

Richard Gill, Oscar Ramos-Rodriguez and Nigel Raine, of Royal Holloway, University of London, set up 40 colonies of bumblebees in the laboratory, tagging almost all of the bees – some 900 – with individual radiofrequency ID chips. These were used to identify individuals as they left and returned the laboratory, through a tube, on foraging expeditions into the wild. As the bees left the nesting boxes to forage, they passed a feeding station containing a sucrose solution and filter paper. In some cases the sucrose was spiked with the neonicotinoid insecticide imidacloprid or the filter paper with the pyrethroid insecticide ?-cyhalothrin or both. For the controls, no insecticide was present. The concentrations of the neonicotinoid were based on levels found in pollen and nectar on treated crops, and of the pyrethroid were based on spraying guidelines.

Bees exposed solely to imidacloprid showed reduced efficiency at foraging while those exposed to cyhalothrin only showed greater death rates – more bees were found dead within the nesting boxes than otherwise.  ‘When the bees were exposed to both compounds, as we predicted this had a double whammy effect, with both reduced foraging efficiency and higher death rates,’ says Gill.

Over four weeks, the control colonies lost around 30% of the colony; the colonies exposed to imidacloprid lost 41%, cyhalothrin 51% and both insecticides 69%.

‘It is clear from our work that long-term exposure is important and that multiple exposure has an additive effect on the colonies,’ says Gill. ‘We believe these factors should be taken into account by the regulatory authorities when assessing pesticide use in the environment.’ Currently, pesticides are tested only singly and for periods of up to 96 hours exposure, and in the wild bees will be exposed to many different insecticides.

Commenting on the study, Norman Carreck, science director of the International Bee Research Association, says, ‘This is an interesting piece of research that adds to our knowledge base of the effects of these insecticides.’ However, Carreck says that the study faces the same problem as all similar research on pesticide exposure investigations. ‘Like all studies of this nature it is extremely difficult to really understand the sorts of concentrations of compounds that bees are exposed to in the wild. So it is difficult to draw conclusions about the significance to the actual effects in the field. The situation in the field is highly variable and it is very difficult to come to a definitive answer.’