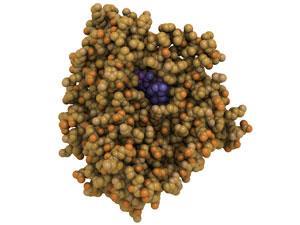 Nature's molecular blowtorches can cut through drugs with ease

US researchers have solved the long-standing mystery of how cytochrome P450 enzymes generate intermediates to perform demanding oxidations of inert C–H bonds without damaging their fragile protein network in the process. The work provides a fundamental insight into biological C–H bond activation and offers a blueprint for protein-based catalyst design.

Cytochrome P450 enzymes metabolise around 75% of known pharmaceuticals and are often likened to biological blowtorches for their ability to activate C–H bonds. It was known that the enzymes activate oxygen at haem iron centres to oxidise C–H bonds and use – somewhat counter-intuitively – a thiolate-ligated electron rich haem to catalyse this reaction. This has puzzled scientists because it would be expected that oxidation of amino acid residues in the protein framework would be preferred over C–H activation.

The reactive intermediate in P450 catalysis is a high-valence highly reactive species called compound I. Compound I abstracts hydrogen from the enzyme substrate to form an iron(iv) hydroxide complex (compound II) and a substrate radical. These species then rapidly recombine to form the hydroxylated product and ferric enzyme.

The team prepared an iron(iv) hydroxide intermediate by reacting the ferric enzyme with an oxidant at pH 9 and then rapidly mixed it with higher pH buffers, up to pH 14, and measured what was happening.

'We have provided the first quantitative measure of the thiolate ligand’s impact on P450 catalysis, and it holds the key to understanding nature’s ability to suppress non-productive oxidations during C–H bond activation,' says Green.

'The really important bottom line is that they have provided a plausible answer to the very important question of why P450 enzymes are effective catalysts for substrate oxidation when, in principle, the oxidising species could be quenched internally by electron abstraction from oxidisable residues,' says Paul Ortiz de Montellano, who investigates cytochrome P450 enzymes at the University of California in San Francisco, US.

The team found that damage to proteins is avoided because the thiolate axial ligand donates an electron to compound I, which decreases the reduction potential and diminishes the driving force for oxidations of the protein’s framework. However, Green explains that the high pKa of the iron(iv) hydroxide complex (compound II) means that the proton coupled one-electron reduction potential remains high for C–H activation to occur.

'The overall effect of thiolate ligation is concluded to provide a 10,000-fold reduction in the rate constant for non-productive oxidation, especially of the protein itself,' says Fred Guengerich, a cytochrome P450 expert at Vanderbilt University, US. He suggests that future efforts to design catalysts in the pharmaceutical and agricultural sectors will benefit from this knowledge.