It’s been known for years that once plutonium is ingested it remains in the body for a long time, but what no one knew was how the plutonium is absorbed. Now, US scientists have found a cellular uptake pathway for plutonium, confirming a previous hypothesis but with a caveat.

That’s maybe not so surprising, says Sarah Heath, a chemist at the University of Manchester, UK, who moved on to working with plutonium after first working with iron. She says that the two metals can often react in the same way.

’The charge density of the two ions is very similar,’ says Heath, and this means the ions behave similarly. 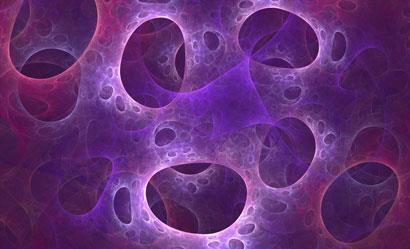 Plutonium hitches a ride into cells on an iron transporting protein

’At this point we realized that our fundamental studies of metal ion recognition by this pair of proteins had important implications for the cellular uptake of plutonium,’ says Jensen.

Usually transferrin (Tf) forms a complex with two iron ions, one sit at the N-terminal end of the protein and one at the C-terminal end. If both of these irons are replaced by plutonium, the transferrin is too distorted to be recognised by the transferrin receptor protein. Using synchrotron X-ray fluorescence microscopy, the team showed that this means the plutonium cannot be absorbed by cells.

It turns out that only transferrin with plutonium bound to the C-terminal end and iron bound to the N-terminal end is a good enough match to be carried into cells. So although plutonium can use an iron uptake system to infiltrate cells, it can only do so with the help of iron.

There are probably other pathways for plutonium uptake Jensen says. ’However,’ he adds ’the great majority of plutonium that gets into the blood stream is bound to transferrin, and the largest fraction of iron-transferrin in human blood (FeNTf) is the precursor to the form of iron-plutonium-transferrin that can be taken up by cells. This suggests that the transferrin pathway is important even if it is not the only way plutonium can infiltrate cells.’

The team have shown various targets to block plutonium uptake, which could prevent the metal getting into cells and causing damage.