The hallucinogen N,N-dimethyltryptamine, the active ingredient of mind-bending snuffs and sacramental  teas used in shamanic rituals in South America and which also occurs naturally in the body, has been unmasked as the binding partner for a widely occurring receptor molecule whose function remains unknown.

For decades scientists have puzzled over the role of the sigma-1 receptor, a protein found in almost all mammalian cells, including the nervous system. A key question that remained elusive was the identity of natural ligands for the protein.

Now a team led by Arnold Ruoho of the University of Wisconsin in the US has provided compelling evidence that dimethyltryptamine, or DMT, is one of sigma-1’s ligands.

Sigma-1 was known to bind a range of molecules with a common chemical backbone. Ruoho and his team searched for naturally occurring compounds with the key structure. They alighted upon DMT, which has been found in human blood, urine and cerebrospinal fluid, but whose function in the body is not known.

The team showed that in the test tube DMT was able to displace molecules that are known to bind with high affinity to sigma-1. They then compared the effect of DMT on heart muscle cells from mice that possessed sigma-1 with those genetically engineered not to produce the receptor - so-called sigma-1 receptor knock-out mice. Here, the activity of an   ion channel was inhibited where sigma-1 was present, but unaffected in its absence. Ion channels are important in cell signalling processes, and the result suggest not only that DMT is interacting with sigma-1, but also that sigma-1 might be an ion-channel regulator. 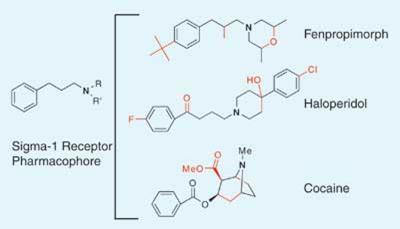 Finally the team gave DMT to mice with and without the receptor. ’We showed that DMT increased the activity of wild-type mice, but in the knock-out mice there was no response,’ says Ruoho.

Intriguingly both sigma-1 receptors and endogenously occurring DMT have been implicated in diseases such as schizophrenia. The new results open the way, says Ruoho, to search for synthetic compounds based on DMT that bind more powerfully to the receptor and observe their effects.

’This is a very important finding and will lead to more interest in the role of DMT and the sigma-1 receptor in mental illness,’ says James Stone of the Institute of Psychiatry in London. ’People did not know what the natural ligand of sigma-1 was, and this has led to a lot of blind alleys. So this is really big news.’