Nano-welding with a light touch

US researchers have found a new way to weld together metal nanowires - simply by bathing them in white light. The finding could offer a new way to fabricate transparent nanowire meshes for electronic applications in areas such as touchscreens and organic photovoltaics.

Erik Garnett and colleagues at Stanford University used a technique called the polyol process to synthesise silver nanowires 30-80nm in diameter and 3-10?m long. The process results in nanowires that are coated in a molecular sheath of polyvinylpyrrolidine (PVP).

The nanowires were deposited on a surface randomly by dropping or spraying. This resulted in many of the wires lying over one another in a criss-cross pattern. Due to the layer of PVP where the nanowires cross, a gap of about 2nm exists between them. 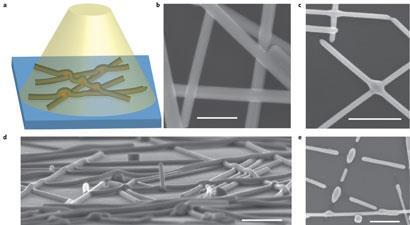 The new nano-welding technique is much faster than conventional methods

When the team shone white light onto the scattered nanowires, heat was generated at these gaps causing the silver to melt and fuse the wires together. ’This highly localised heating arises from the extreme field enhancements in small gaps between metal nanoparticles and is well known in the field of plasmonics,’ says Garnett. ’Essentially, the oscillating electric field of the light drives free electrons in the metal to move back and forth and heat up rapidly. This happens everywhere a little bit but is very intense near the junction due to the high local fields.’

Garnett believes the method has advantages over other ways to create such nanowire networks. ’The standard method is to heat the entire sample to approximately 200?C for about 20 minutes. The advantages of our technique are that it is much faster, only heats locally and the welding process self-limits which avoids the problem of overheating the junctions which can cause them to break apart.’

The team is now looking to improve the efficiency of the process. ’We have already shown the benefits of this approach for transparent electrodes on polymer solar cells but these first devices had only modest efficiencies,’ says Garnett. ’We are currently working on optimising the process as well as trying to apply it to other nanowire materials such as copper, which would reduce the cost even further.’

Commenting on the work, Robert Dorey, head of the microsystems and nanotechnology centre at Cranfield University, UK, says: ’Being able to reduce the temperature at which materials can be joined offers up huge potential in being able to join different materials.’ Dorey adds: ’Silver is a very interesting material, particularly the way in which it interacts with light, but it has a finite number of uses. If the results can be translated to other metals and non-metallic systems that would be a significant development.’