The shape of nanopores on surfaces alters crystallisation rates, which could be important for fine chemical production

Researchers from the US and Japan have shown that the crystallisation of a solute can be profoundly influenced by the shape of nanopores on the surface it is placed upon. The finding potentially offers a new way to tune the rate of crystallisation of different compounds and the morphology of the crystals that are formed - which are important considerations in the manufacture of certain drugs and fine chemicals.

The formation of crystals from a solution is often initiated at the interface between the solution and a surface and it is widely thought that the roughness of the surface increases the rate of nucleation. However, little is known in detail about these heterogeneous nucleation phenomena. Now, a team led by Bernhardt Trout of the Massachusetts Institute of Technology has shown how differently shapes of nanoscale indentations on a polymer surface can have a significant impact on crystal formation. 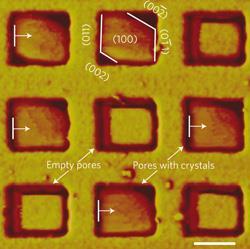 Trout’s team attached various different nanoparticle shapes - including spheres of silica and iron oxide hexagons - to a surface before cross-linking a polymer over the surface. The polymer was then removed leaving shaped indentations in the polymer’s surface. These pores ranged in size from 15 to 120 nm. The researchers then brought a solution of aspirin into contact with the various different surfaces and monitored crystallisation.

’We had assumed that any kind of pattern would speed up the nucleation,’ says Trout. ’But we were surprised that this was not the case. The hemispherical indentations slowed the nucleation down.’

Hexagonal and square pores, however, significantly increased the rate of initiation of crystallisation: hexagons were 10 times faster than hemispheres and squares three times faster. It appears that the angled facets of the squares and hexagons allow the crystals to grow more freely, with less strain in the crystal structure. All three surface patterns also gave rise to crystals with subtly different morphologies.

Fabricating surfaces of defined nanoporous shape could, Trout suggests, provide a new route to fine-tuning the formation of crystals for fine chemicals and pharmaceuticals.

Aled Finniear, chief executive of Park Place Research, a UK-based company that specialises in solving crystallisation problems, says that Trout’s work ’provides further evidence to the importance of the nucleating surface’. He adds: ’It offers the tantalising possibility of tailor-making a surface to enhance the chances of crystallisation of particularly problematic molecules.’