Nanotube fibre production in a spin 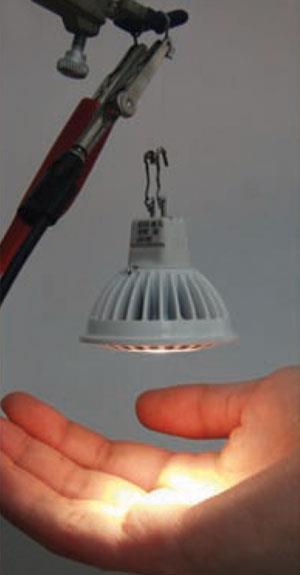 No, that light bulb isn't floating in thin air, it's suspended by two 24µm thick fibres spun from carbon nanotubes (CNTs). An international collaboration led by Matteo Pasquali, at Rice University in the US, has developed a method of manufacturing high-performance CNT fibres using wet spinning.

Until now, the best performing CNT fibres have been manufactured in a solid state process that is not suited for scaling-up. Wet spinning, pulling a precipitate out of solution with a rotating spinneret, has been used previously but resulted in fibres with disappointing properties. It was suggested that this was because the CNTs were too short, but Pasquali's team have now shown that short CNTs are actually what you need. Their new fibres are spun using nanotubes that are approximately 5µm long.

The CNT fibres can be spun into lengths of 100–500µm long and are much stronger than previous wet-spun fibres and are of comparable strength to solid state manufactured fibres. When Pasquali's team doped their fibres with iodine they also beat their doped solid state competitors when it came to electrical conductivity, which is why the threads in the picture can not only suspend the bulb but also carry enough electricity to light it.

In their paper, Pasquali's team suggests that using shorter CNTs improved CNT–CNT stress transfer and lowered the defect density in the fibres, as the shorter CNTs can fit together better. However, even these improvements result in fibres with poorer properties when compared with single CNTs. The next step to improve their fibres, say the team, is to improve the manufacture and consistency of the CNTs that are used to make the fibres.