US researchers have used webs of carbon nanotubes to print high-performance electronic circuits on thin films of plastic. The work is a major step towards the development of ’plastic electronics’, where circuits on light, flexible surfaces could provide a range of products from paper-thin displays to intelligent food packaging and smart clothing.

For decades, scientists have been investigating flexible alternatives to crystalline semiconductor circuits (which are produced on rigid glass or silicon substrates). Most work has focused on organic molecules, but the devices created have had poor electronic performance.

Now a team led by John Rogers of the University of Illinois at Urbana-Champaign has shown that a web of carbon nanotubes deposited on a flexible plastic surface can form the basis of an electronic circuit containing scores of transistors with impressive electronic performance. 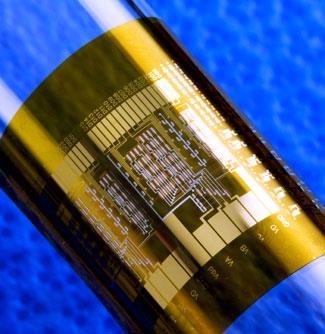 Integrated circuits based on single-walled carbon nanotube strips, on a flexible plastic substrate

Merits of the mesh

’It has been known for a long time that carbon nanotubes are spectacularly good electronic materials,’ says Rogers. ’But until now most people looking at circuits have used single nanotubes as the active component - with a number of tubes connected together.’ Such circuits are not only tricky to assemble, but the characteristics of each nanotube can have a profound effect on the device.

’Instead of using individual tubes as the current-carrying component we are using between 10,000 to 50,000 tubes in each transistor device, which statistically averages out any variations that different tubes might have,’ says Rogers. His team grew tens of thousands of nanotubes by chemical vapour deposition, and transferred the lot as a random mesh onto flexible polyamide.

The researchers then deposited insulators and interconnect materials on top of the nanotube network in order to create circuits, with the most complex example containing around 100 transistors. ’The largest number of nanotube devices previously integrated together into one circuit has been about five,’ Rogers says. ’On the other hand a modern microprocessor has 100 million. Basically we have taken a step forward and if we can do 100 there is a plausible argument we can do 100,000.’

Because some carbon nanotubes are metallic, the team had to overcome the difficulty of charge flowing across one tube to the next, shorting out any circuit. By modelling this ’percolation’ of charge through the mesh, the researchers worked out that by etching away narrow parallel strips they could stop charge leakage.

The nanotube transistors outperform their organic counterparts significantly. ’One key parameter is called field effect mobility, which tells you how effectively charge is flowing through the transistor,’ says Rogers. "We achieved a value that was three orders of magnitude better than a typical polymer-based device and comparable to a silicon-wafer-based device."

Iris Nandhakumar, a nanoelectronics expert at the University of Southampton in the UK, says that the work is ’surely groundbreaking stuff. From a performance point of view these are impressive numbers.’ The research ’is significant and will stir things up quite a lot,’ thinks David Carey of the Advanced Technology Institute in the University of Surrey, UK.

But Rogers says that his team’s use of carbon nanotubes doesn’t mark the end of the road for the organic approach to flexible electronics. Organic molecules aren’t yet able to switch current on and off as fast as silicon or nanotube-based circuits - but for display applications, he says, switching speeds to suit the human eye do not have to be as high as for computer chips. And organic semiconductors are relatively cheap to produce. ’Whether nanotubes take over from organics will ultimately depend on cost,’ agrees Nandhakumar. ’While this is a positive step in the right direction, organic semiconductors could be better for different applications.’

Carey says the cost of nanotubes is relatively high at the moment but should come down. ’ Cost is an issue but it should not stop researchers from getting involved in this work. Mass production of nanotubes will come,’ he says.