Researchers in Korea and the US have shown that modified carbon nanotubes can protect brain tissue from the damage caused by ischaemic stroke, where the blood supply to the brain is interrupted. The work could lead to new treatments to help the brain repair itself after this type of stroke.

Sung Su Kim, of Chung Ang University in Seoul, and colleagues treated commercially available carboxylated nanotubes with a nitrogen and hydrogen plasma, resulting in positively-charged amine groups on the surface of the nanotubes. These amine-modified nanotubes were then injected in the brains of rats. A week later ischaemic stroke was artificially induced in the rats by surgery. The team showed that rats treated with the nanotubes were able to balance on a rotating rod more efficiently than those that had not had the treatment, and that under the microscope there was less brain damage in the treated animals. 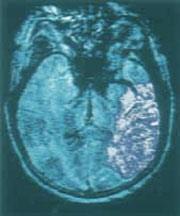 Brain of a stroke patient showing the damaged area

Precisely how the nanotubes protect the brain tissue is not yet clear, Kim says. ’This should be elucidated by further study. We hypothesise that positive charged effect and high surface energy by amine-modifying provide a favourable environment for neurons, followed by enhanced tolerance of neurons against environmental stress.’

Levels of a protein involved in cell adhesion remained higher in the treated brain tissue, suggesting that the nanotubes could stabilise this protein. There is also less inflammation.

Maurizio Prato of the University of Trieste in Italy has researched the interaction of functionalised carbon nanotubes with nerve cells. He says that the work is ’impressive’ and demonstrates the ’enormous potential of carbon nanotubes in nervous system applications.’ Prato adds, ’A very important issue will be on what the   results will be once the stroke has occurred and the nanotubes are administered following stroke.’

Kim says that a key issue in applying the nanotubes after a stroke will be to ensure that no further brain damage in caused, and that his group is looking into new formulations and treatment methods for such an approach.