Scientists in China and the US have developed a miniature fuel cell that can produce electricity from biological fluids such as blood. The cell could, the researchers suggest, be an autonomous source of power for devices implanted in living tissues, such as medical biosensors.

Jing Zhu, of Tsinghua University in Beijing, and colleagues constructed the fuel cell by coupling two redox enzymes via a nanowire of a polymer composite capable of conducting single protons. Glucose oxidase is tethered to one end of the 200-800nm diameter wire by carbon nanotubes, which improve its stability, while laccase is attached to the other end of the wire. Each end of the wire sits on a gold electrode.

At the anode the glucose, an almost ubiquitous solute in biological fluids, is oxidised, generating protons and electrons. The protons are siphoned away down the nanowire while the electrons are directed around an external circuit to provide an electrical current. At the cathode the protons and electrons are combined with dissolved oxygen to generate water, catalysed by the laccase enzyme. The researchers were able to generate electricity from the fuel cell in human blood and the juice of a watermelon. 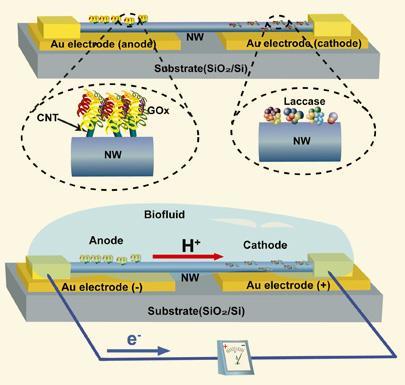 The nanowire based biofuel cell could be fuelled by biological fluids such as blood or glucose. When immersed into a biofuel solution, two chemical reactions occur in the anode and cathode regions, creating a corresponding chemical potential drop along the nanowire, which drives the flow of protons in the wire and electrons through the external load

’The nanowire-based fuel cell generates an output power as high as 0.5-3microwatts, and it has been integrated with a set of nanowire based sensors for performing self-powered sensing,’ says Zhu. ’It shows the feasibility of building self-powered nanodevices for biological sciences, environmental monitoring, defence technology and even personal electronics.’ Zhu adds that different pairs of enzymes could be used depending on the local environment in which the fuel cell is to operate.

Peter Harrop, chairman of the company IDTechEx which carries out research and analysis on energy harvesting technologies, says, ’This is an interesting initial study of a new approach to energy harvesting in the human body and the power generated appears to be suitable for nanodevices.’ Harrop adds, however, ’Whether it becomes a commercial prospect depends on adequate life, reliability and cost being demonstrated in further work.’ Nowadays, says Harrop, there is huge interest in implanted medical devices including for drug delivery, sensing vital signs, defibrillation, heart pacemakers and so on. ’This device may suit the low power end, notably sensors, but there are alternative approaches,’ he adds.