Researchers studying a bacterial molybdenum-storage protein have teamed up with inorganic chemists to resolve the structure of the storage protein’s central cavity.

The findings make an ’unprecedented’ addition to current understanding of cluster synthesis based on tailor-made protein-based templates, as well as about nucleation/condensation processes at the single-molecule level, say the researchers. And the storage protein could be used as a ’nano test tube’ for further studies, they suggest.

Inorganic chemists have used polyoxometalate (POM) chemistry to create purely inorganic molecules that can compete with biological molecules in terms of size and complexity. Achim M?ller and colleagues at the University of Bielefeld, Germany, have now connected this field to biochemistry by showing that a natural metal storage protein contains a range of very similar metal clusters.

M?ller’s group has previously created a plethora of nanoscale shapes and functions based on molybdenum oxides, including a so-called giant wheel, nano hedgehogs, and capsules with gated pores. Now they have teamed up with Ulrich Ermler’s group at the Max-Planck Institute for Biophysics at Frankfurt, in order to study the structures of metal complexes contained in the molybdenum storage (MoSto) protein of the bacterium Azotobacter vinelandii. 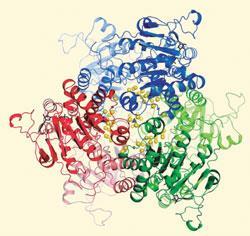 The protein can bind around 100 molybdenum atoms, serving as a reservoir for the metal which is crucial to the function of several enzymes, including nitrogenase - which bacteria use to fix nitrogen.

The researchers found that replacing the polyoxometalate clusters of molybdenum in the MoSto protein with tungsten oxide improved structural stability, making it suitable for detailed analysis.

The researchers used x-ray crystallography to resolve the protein structure, and found that the protein consists of three pairs of subunits arranged in three-fold symmetry (C3) around a large central cavity. The walls of this cavity present specific metal binding sites occupied with 14 tungsten oxide clusters, each containing three or more tungsten atoms. While there are four cluster types that appear in three symmetry-related positions, the remaining two are unique and located in the middle, on the C3 axis.

The option of using the storage protein as a suitable nano test tube could be explored, say researchers. For instance, they suggest, modifying the relevant protein pockets by the site-directed exchange of amino acids could create new functionalities or patterns with directing function.

Lee Cronin at the University of Glasgow, UK, applauded the work. ’The existence of well-defined different clusters within the cavity has tremendous perspectives for many topics. For example, it means that the functionalized pockets acting as templates in these proteins can be bio-engineered by site-directed mutagenesis to construct other cluster architectures. It could even lead to the use of these proteins as artificial factories for the production of nanoscale oxides with interesting functionalities,’ Cronin told Chemistry World.

’This is a beautiful example where two seemingly unrelated fields - molecular biology and metal oxide chemistry/materials science - have been combined,’ he said.