Nanotubes from the brain could be used to detect organophosphate neurotoxins

Korean researchers have made a neurotoxin detector system based on nanomaterials from the brain itself.

-amyloid of Alzheimer’s disease, but FF dimers can also self-assemble into nanotubes. Chan Beum Park’s team at the Korea Advanced Institute of Science and Technology in Daejeon, Korea, has used these nanotubes to give an optical signal in the presence of phosphate based neurotoxin paraoxon

Paraoxon is the active metabolite of the insecticide parathion and is about 70 per cent as potent as sarin gas - a chemical warfare agent. The World Health Organization classifies paroxon as an acute hazard and has called for a worldwide ban on the use of the insecticide, which has also been used as a poison. Simple detection of paraoxon could prevent more deaths.

Jungki Ryu, one of the researchers involved in the study, explains that originally the group just thought that they could use the nanotubes to improve the luminescence response of lanthanide complexes in the presence of organophosphate neurotoxins. However, they found that using the FF nanotubes could make the lanthanide complexes react selectively with paraoxon among various organophosphates. 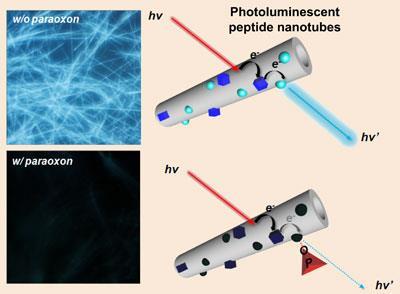 When paraoxon is present, the phosphorescence is quenched

Ryu says that they found that their lanthanide complexes were so strongly bound to the FF nanotubes that only the latter mechanism occurs and this means that ’lanthanide complexes incorporated with FF nanotubes can selectively detect paraoxon’. Scott Jones who works on fluorescent sensors at the University of Southern Mississippi, US, agrees that the response of the sensor and the selectivity looks good.

Ryu concludes that although the team has developed an efficient and selective sensing platform for paraoxon, significant improvements are required before the technology can be used outside of the lab in a portable sensor, and that’s what they are now working on.