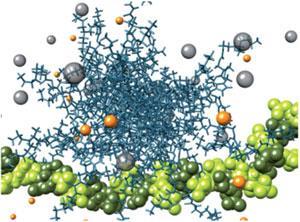 Recovering from operations could become easier thanks to a self-assembling multivalent heparin binding agent being developed by scientists in the UK, Italy and Spain.

During some surgical procedures, heparin is given to patients to prevent blood clots from forming by thinning their blood. Protamine is then given following surgery to inactivate heparin and allow healing to begin. However, this drug can have dangerous side-effects, so is often only used in small doses but this can lead to bleeding and further surgery being required. Spending time at the hospital after his husband’s lung transplant gave David Smith at the University of York personal insight into the problems of using protamine and inspired him and his team to devise an alternative.

The Self-Assembled Multivalent complexes they have created, called SAMul in honour of Smith’s husband, Sam, are made up of molecules containing an ionic heparin binding part and a hydrophobic part. In biological media, the hydrophobic section induces the individual molecules to aggregate into micelles, with multiple heparin binding sites exposed on the micelle surface. This multivalency increases the micelles’ ability to bind heparin. Incorporating an ester linker into the molecules mean they will slowly degrade via hydrolysis if an excess is used, minimising any side effects.

The complexes were tested in water (with and without salt), human serum and blood plasma in order to understand their structure and activity in bio-relevant environments. ‘We wanted to work through a series of experiments in which we put our molecules properly through their paces,’ explains Smith.

They found the addition of salt increased the size of the micelles, increasing the number of binding sites and the strength of heparin binding, thereby improving their performance relative to protamine. Conversely, human serum reduced the binding ability of the complexes, possibly due to the micelles disassembling into single molecules and binding to other compounds present in serum. The final test was in blood plasma, the most medically relevant environment. They saw the micelles reverse the effect of heparin and induced clotting.

‘There is a lot of work yet to do,’ says Barbara Mulloy, a heparin expert at King’s College London, UK, ‘but if the SAMul strategy can address this problem, it really will have the edge over existing heparin neutralising agents.’

The team is continuing to stabilise the assemblies and test their toxicity. ‘If successful, we will then be ready to carry out animal studies, and hopefully, in due course, clinical trials,’ says Smith.