Researchers in the US have shown that perovskites - a class of mixed oxide minerals - can perform as well as platinum in certain types of catalytic converter for removing pollutants from diesel exhaust. The finding could eventually result in cheaper, more robust catalytic converters for diesel engines that do not rely on expensive and scarce platinum group metals. 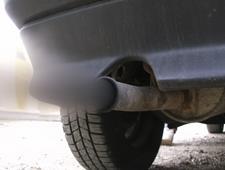 Vehicle exhaust is a major polluter

One of the main pollutants that needs to be removed from vehicle exhaust is a mixture of NO and NO2, referred to as NOx, which can be rendered harmless by reducing the gases to nitrogen. But because diesel engines run ’lean’ - meaning there is an excess of oxygen in the fuel mix - the oxygen-rich environment makes the reduction step difficult. One solution is a lean nitrogen trap. Here, NO is catalytically oxidised to NO2, which is then chemically combined with an alkali or alkaline earth component to form metal nitrates and nitrites. Once the storage system is saturated the engine switches to a fuel-rich burn, enabling the nitrogen compounds to be reduced by hydrocarbons from the fuel, forming nitrogen gas which is expelled.

The oxidation of NO to NO2 requires a platinum group metal catalyst, as does the fuel-enriched reduction cycle, where the hydrocarbons are oxidised to eliminate oxygen from the exhaust to allow the reduction step. These metals are, however, costly and scarce. Now, a team of scientists at General Motors Global Research and Development in Michigan has shown that catalysts based on the perovskite oxides La1-X SrXCoO3 and La1-xSrxMnO3 can convert NO to NO2 in simulated diesel exhaust as efficiently as platinum. The oxides are, says team member Wei Li, very simple to manufacture and process and are far cheaper and more durable to heat than their platinum counterparts.

The new catalysts are less efficient at oxidising hydrocarbons and are prone to ’sulfur poisoning’ - deactivation by the presence of sulfur in the fuel. However, the research team found that the presence of palladium helped alleviate these problems.

Li says that the team is working to clarify precisely how the catalyst works, and in the meantime will study the its performance in real diesel exhaust.

Justin Hargreaves, a catalyst expert from the University of Glasgow in the UK, describes the research as ’a very interesting piece of work.’ Hargreaves adds, ’The observation that the perovskite catalysts studied exhibit higher activity than commercial platinum-based catalysts under realistic screening conditions istechnologically significant, as is the application of perovskite systems combined with palladium for lean NOx trap catalysis.’