Chemists in Japan have demonstrated a new ’clean’ catalytic system for converting propene to propene epoxide - an important industrial feedstock - using gaseous oxygen as the oxidising agent, instead of the standard process which requires chlorine and produces a range of toxic by-products.

While the researchers concede that their method is currently too inefficient for industrial purposes, they say that it does represent an important advance towards a greener way to produce this important compound, of which some 7.5 million tonnes is manufactured annually throughout the world.

The catalyst developed by Masatake Haruta, of Tokyo Metropolitan University, Japan, and his team consists of uniform nanometre-sized clusters of gold that sit on a support that contains titanium. Oxidising propene, CH3-CH=CH2, involves inserting an oxygen atom into the double bond, forming a ring of two carbon atoms and one oxygen. This is tricky to achieve using oxygen as the oxidising agent - splitting the molecule into its constituent atoms requires a lot of energy, and propene preferentially reacts with atomic oxygen to form the aldehyde propenal (acrolein).

Haruta’s catalyst gets around these problems because the gold clusters convert oxygen and water into a hydroperoxide species, which is then passed on to the titanium centres. This hydroperoxide contains oxygen in the correct conformational and energetic state to perform the desired epoxidation of the propene. An oxygen radical remains on the gold, and in a second stage of the oxidation process, this oxidises further propene molecules in a non-selective way. ’Propene epoxidation with dioxygen alone, instead of chlorine, is an ideal reaction that produces only what we need from abundant resources, namely air,’ Haruta says. 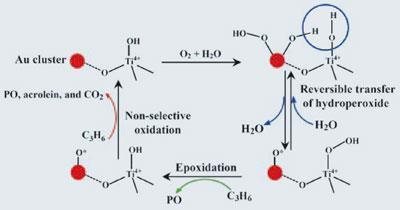 Yields are, however, low, with around only one per cent of the propene being converted to all oxidation products, and about half of this being propene epoxide.

While Haruta concedes that the yields and selectivities the team has have achieved so far are inadequate for an industrial process, he adds that ’This novel catalysis by gold clusters may lay a landmark advance towards green and sustainable chemistry.’ Haruta believes that improvements will be possible by altering the size of the gold clusters and their configuration in relation to the titanium centres and developing ways to improve the selectivity of the oxygen radicals in the second stage of the oxidation process.

’Any advance in the direct epoxidation of propylene is of major interest,’ says Justin Hargreaves, a catalyst expert at the University of Glasgow in the UK. ’Whilst the performance of this catalyst is below that necessary for industrial application, the study reports a number of very interesting observations, which could lead to the development of new more active catalysts in this area.’