New ceramic can handle the heat

First tunable material that either expands, contracts or remains unchanged when heated 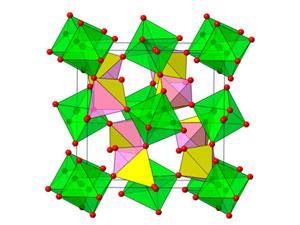 Tin oxide octahedra are shown in green, and molybdenum oxide tetrahedra in yellow/pink with their positions dependent on heat

Now, a team led by John Evans of the University of Durham has created what is believed to be the first single-phase material that can be tuned through the range of thermal expansivity – from positive through zero and on to negative.

ZrMo2O8 is a well-characterised oxide that has negative thermal expansion properties. Evans’s team discovered that, unexpectedly, the tin analogue of this cubic material, SnMo2O8, expanded when heated.

The researchers reckoned that it might be possible to substitute some of the zirconium sites in the ‘negative’ crystal with tin. However, these ceramics are difficult to make. They are what is termed metastable, and conventional approaches of simply mixing and heating will not produce the desired end-product. ‘There is only a small temperature window where you can control how much zirconium and how much tin is incorporated into the lattice to produce the cubic product,’ Evans says.

To find the optimal conditions, the team carried out the syntheses in an x-ray diffractometer, effectively monitoring the crystalline structure of the product as it was forming. ‘We showed that it is possible to introduce varying proportions of zirconium into the lattice and produce a stable ceramic that can have a positive, negative or zero coefficient of thermal expansion,’ Evans says. ‘In other words it is tunable.’ In essence the ‘positive’ nature of the tin is counteracted by the ‘negative’ zirconium, both of which are, crucially, within the same crystal structure.

Andrew Alderson is an expert in smart materials with unusual thermal properties at Sheffield Hallam University, UK. He says that the new material ‘has potential to impact on technologies ranging from dental composites, microchips having improved efficiency and lifetimes, to high precision optical mirrors and any other devices where management of thermal stress due to mismatch in the thermal expansion properties of materials is required.’