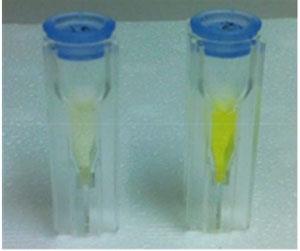 UK researchers have developed a faster way to detect Staphylococcus aureus bacteria using a fluorescent probe. The method holds promise as the basis for a new rapid diagnosis kit to identify infections in hospital patients.

S. aureus infections, including both methicillin-resistant and methicillin-susceptible strains (named MRSA and MSSA, respectively), persist in hospital wards worldwide. In the UK, controlling outbreaks is a constant challenge for the NHS. Fast diagnosis is as important as thorough treatment in the early stages of an outbreak. However, current screening methods are slow and costly.

‘The problem with existing techniques is that they take time,’ explains Adam Le Gresley, of Kingston University, who led the team that developed the probe. ‘You either have to amplify the bacteria in culture, or amplify the DNA with PCR. It’s not something that can be done at the point of care.’

To address this, Le Gresley and his colleagues have developed a test that is sensitive to very low levels of bacteria, eliminating the need for culture. The method utilises staphylothrombin, an enzyme complex unique to S. aureus. It employs a test solution comprising a tripeptide chain, which mimicks staphylothrombin’s natural target, that is bound to rhodamine, a fluorescent dye. When S. aureus is present, it releases staphylothrombin which frees the rhodamine from the tripeptide by cleaving an amide bond. This results in a strong colouration in the solution.

It is already possible to use fluorescent probes to screen for S. aureus, but existing tests use coumarin in place of rhodamine. Coumarin is much less fluorescent, so test sensitivity is poor and bacteria from patient samples must be cultured for at least six hours to give an accurate result.

The team’s rhodamine-based system is a vast improvement. When used with clinical strains of MRSA and MSSA in comparable concentrations to patient samples, the test was reliable and fast, giving a positive result in less than half an hour.

The next step is to develop a protocol or device that can be used in a practical clinical setting, notes Le Gresley. ‘We are currently doing community-based studies to establish the diagnostic accuracy of our system,’ he says. ‘A point of care test would have significant cost benefits. A single gram of the active component is enough to do 80,000 tests.’

Peter Wilson, a consultant microbiologist at University College Hospital in London, UK, agrees that a rapid test kit could be useful, but says the test’s inability to distinguish between MRSA and MSSA is a limitation. ‘The treatment and management of the patient is different for both, so you really need to know which is which before any action can be taken,’ he warns.