Scientists in the US have developed a new sensor that can track and measure lipids in living cells. Lipids are key signalling molecules in living systems and disturbances in lipid signalling networks have been implicated in a range of diseases such as diabetes, cancer and inflammation. 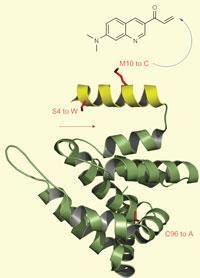 Currently, lipids can be located and visualised in cells using proteins with lipid-binding domains and attaching fluorescent tags to these. However, these proteins aren’t usually highly specific to particular lipids and also interact with other proteins in the cell. This means that they can provide only limited quantitative information about their lipid target.

Now, Wonhwa Cho’s team at the University of Illinois at Chicago have found a way to get much richer quantitative data on specific lipids. The researchers focused on the key signalling lipid phosphatidylinositol-4,5-bisphosphate. They used protein engineering techniques to fine tune a protein and increase its affinity for the lipid and to decrease its interaction with other proteins and lipids.

The next stage was to attach a fluorescent tag to the protein. The team used the small organic fluorophore 2-dimethylamino-6-acyl-naphthalene. Crucially, the tag only ’lights up’ when the protein meets the specific lipid target. ’All the lipid molecules sit in membranes, where the polarity is different to the rest of the cell,’ Wonhwa explains. ’So when the protein meets its lipid target, the environment’s polarity changes and this alters the electron distribution in the conjugated dye, resulting in fluorescence.’

With the sensor only ’turning on’ in the presence of the lipid target and with the protein highly specific to a given lipid, the system is able to track the presence and quantity of the target lipid at a given time and location. The team has already used the sensor to monitor an immune cell as it engulfed another cell.

’Lipids are highly dynamic molecules and their location and concentration changes constantly by the action of enzymes,’ says Wonhwa. ’If we can measure lipid concentrations in space and time we can ask a lot of questions about how cells are regulated in health and disease.’

Having demonstrated the feasibility of the approach, the team is now constructing a library of proteins that can bind highly specifically to a range of lipids.

Phillip Hawkins, who researches lipid signalling pathways at the Babraham Institute in the UK, says that while the new work does not represent a great conceptual leap forward, given that fluorescent protein probes for lipids have been used for several years, the new sensor ’does give much better sensitivity than current probes, so it is a definite advance and it may be enough to say something about the non-uniform distribution of these lipids in membranes’.