Shaken or stirred? Chemists discover a new self-replication system whose outcome is dictated by how mechanical force is applied to it

Chemists from the Netherlands and the UK have discovered a novel molecular self-replication system that is triggered by mechanical force. Intriguingly, the type of force applied to the system dictates the pattern of self-replication. The work could have implications for the origins of life on Earth.

An international team, led by Sijbren Otto from the University of Groningen in the Netherlands, was investigating the self-assembly of short peptide sequences in solution. These peptides have phenyl ring head groups bearing a pair of sulfide groups that can lock the molecules together in ring formations to form macrocycles with three to seven units in each ring. The researchers found that the six- or seven-unit rings can recognise themselves and self-assemble into tubular stacks, which form long fibres. This self-assembly pulls the solution out of equilibrium and favours the formation of the six- or seven-unit ring - resulting in a process of self-replication. 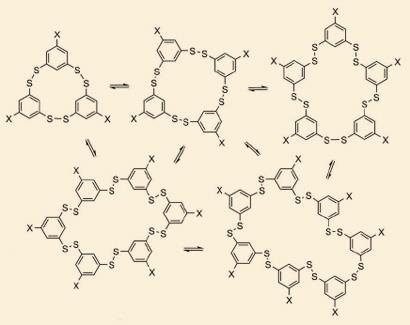 Disulfide bonds allow formation of various macrocycles. The peptide chains (X) stack to bring the rings together into fibrils

However, a puzzle emerged. ’Initially we were only stirring our solutions, but we were finding we could not reproduce our experiment,’ says Otto. Sometimes fibres consisting of six-unit rings would be formed, other times seven-unit rings - but never both in the same mixture. ’We decided stirring was too difficult to control so we started to shake the solution. We then found that we only produced fibres consisting of the six-unit macrocycle but not the heptamer.’

This effectively solved the riddle. When the team examined the stirring regime they noticed that sometimes the flask was placed peripherally on the stirring plate, resulting in a certain amount of agitation. When the stirring was tightly controlled, the sample produced fibres consisting only of heptamers.

’The fibres grow from their ends, and you can help it to grow by providing more ends - by breaking the structure,’ Otto says. Shaking is a relatively mild disturbance and breaks the fibres that are inherently weaker - in this case the hexamer fibres, Otto explains. This leads to more hexamer fibres being produced, outcompeting any heptamer for the building blocks. ’But if you stir the mixture you break both the heptamer and hexamer - then it is a matter of which one grows more quickly,’ says Otto. ’The heptamer does, and so wins the race.’

Otto says that their system demonstrates both self-assembly and self-replication, bringing artificial self-replication systems to a higher level of complexity than is usually seen.

Daniel Frankel, of the University of Newcastle in the UK, researches ways in which prebiotic molecules could have spontaneously self-assembled to form the first stirrings of life on Earth. ’The possibility of simple mechanical forces as a evolutionary selection pressure suggests a plausible step in prebiotic chemistry which could help to explain the formation of biopolymers and complex molecules in the absence of enzymes,’ he says.