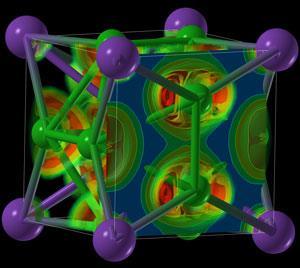 Under pressure, common salt can take on some exotic structures beyond the familiar 1:1 lattice. Na (purple); Cl (green)

The discovery that NaCl3 and Na3Cl can be stable at increased pressures shows that core chemistry principles can be overturned. So says Artem Oganov from the State University of New York, US, whose team predicted and then produced these strange forms. ‘Rules of chemistry as fundamental as charge balance and octet rules can break down at relatively moderate pressures,’ Oganov says. ‘States with unexpected chemistry that are then formed have multiple unusual properties that can be exploited.’

Oganov’s team has developed a computational code called USPEX that predicts crystal structures at given pressure and temperature conditions from chemical composition. Using it they construct compounds violating rules of chemistry and quantify how energetically unfavourable they are. ‘Upon changing external conditions like pressure and temperature, energies will change and forbidden compounds may become stable,’ Oganov explains.

Common salt’s iconic 1:1 charge balance and ionic structure make it an obvious target for USPEX. After preliminary calculations showing possible forbidden NaCl structures Oganov asked Weiwei Zhang, visiting from the China Agricultural University, to investigate. In the following months Zhang showed that at pressures up to 250GPa Na3Cl, Na2Cl, Na3Cl2, NaCl3 and NaCl7 are theoretically stable, with interesting bonding and electronic properties. But over this pressure region NaCl is also stable and wouldn’t spontaneously decompose into other compounds. Instead, the scientists realised that reaching these structures needed high temperatures and an excess of either Na or Cl.

Over further months of experiments, Oganov’s collaborators crushed salt in a diamond anvil cell, between two tiny diamond surfaces, at pressures from 10 to 80GPa. X-ray diffraction and Raman spectroscopy showed that heating it in excess chlorine with a laser produced two NaCl3 phases, one above 18GPa, the other beyond 54GPa. Heating with excess sodium produced Na3Cl stable down to 20GPa.

Oganov is now filing a patent covering materials with exotic properties produced by these methods. He also hopes to stabilise such materials under normal conditions, formulate general rules for their behaviour and consider their role in planet formation. ‘It is possible that planets are made not of the compounds we think they are,’ he suggests.