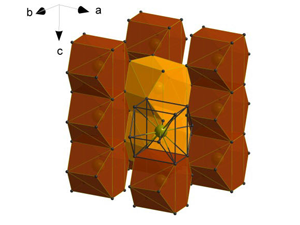 A new, extremely hard superconductor has been discovered by researchers in Europe and the US.1 Significantly, iron tetraboride's superconductivity was predicted from advanced electronic structure computations years before it was synthesised. The researchers hope that their work will provide a stepping stone to discover new superconductors using computational algorithms.

Using computer models to design functional materials has advanced considerably, reducing the need to synthesise numerous compounds to find one with the requisite properties. Theoretically predicting superconductivity, however, remains extremely difficult. This is because electrons only form Cooper pairs, which are responsible for superconductivity, at extremely low energies, and electronic structure calculations need very high accuracy to determine whether or not cooling a particular material to cryogenic temperatures will lower their energy far enough.

There have been successes though. In 1984, for example, Kee Joo Chang and Marvin Cohen at the University of California, Berkeley, US, used density functional theory to correctly predict that at high pressures and low temperatures silicon would superconduct.2 Increasing computer power and developing electronic structure algorithms have enabled more ambitious predictions.

In 2010 and 2011 Aleksey Kolmogorov and colleagues at the University of Oxford, UK, and Ruhr-University Bochum in Germany predicted that, at very high pressures, iron and boron would form the previously unobserved compound FeB4 and that, when cooled to cryogenic temperatures, this compound would superconduct. Kolmogorov, now at Binghamtom University, US, has now collaborated with European experimentalists to prove this.

When the scientists from Bayreuth subjected iron and boron to pressures of 8–18GPa and temperatures of 1500–2000K, crystals of FeB4 formed, intertwined with two other previously unidentified iron borides. After manually separating tiny pieces of FeB4 from the other borides, they found it became strongly diamagnetic below 3K – a clear sign of superconductivity. They also found that the compound has unexpectedly high hardness and compressive strength – when compressed along one crystallographic axis it was as strong as diamond.

The researchers suggest that the combination of hardness and superconductivity could prove useful in superconducting nanoelectromechanical systems. However, team member Natalia Dubrovinskaia, of the University of Bayreuth in Germany, stresses that ‘the main result is not prospective applications of this particular material, but the change in vision regarding the possibility to design superconductors from scratch’.

Igor Mazin of the US Naval Research Laboratory in Washington DC, an expert on superconductivity, agrees the most significant result is the correct prediction of superconductivity in a hitherto unknown compound. He points out, however, that no one knows how the most interesting high temperature superconductors work. ‘To speak of implementing the theory computationally would make no sense because we do not have a theory to implement!’